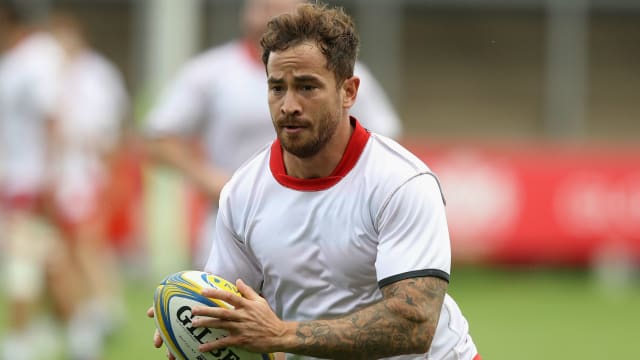 Danny Cipriani has published an apology after receiving a fine for pleading guilty to common assault and resisting arrest following an incident at a Jersey nightclub.

The Gloucester and England fly-half admitted to the two charges at Jersey Magistrates Court on Thursday. Additional charges of larceny, assault on police and being disorderly on licensed premises were dropped.

Cipriani was docked £2,000 and ordered to pay £250 compensation for his misdemeanours, which occurred in St Helier in the early hours of Wednesday morning.

Gloucester released a statement declaring their player, who has recently joined from Wasps ahead of next season, would receive their "full support", and Cipriani subsequently took to Twitter to express his remorse at the whole fiasco.

"I want to start with a heartfelt apology," Cipriani's statement began. "To my club, my team-mates, supporters and most importantly the police. They have a tough and vital job and I'm mortified that, earlier this week, I acted in a way that I hugely regret.

"I am truly sorry. I would also like to put on record the words of Magistrate Sarah Fitz who publicly stated that 'it was a minor incident' and 'a fine is more than sufficient'.

"I was wrong to argue with a bouncer, and pull on his camera tie. I was also wrong to resist arrest. This is why I pleaded guilty to these two charges and all other charges were dropped by the prosecution.

"I was initially confused as to why I was being arrested by three officers. This led me to react in the wrong manner for a matter of seconds, seeking to hold off the police officers rather than accepting their decision. It goes without saying, given the words of the Magistrate, that I didn't strike anyone or initiate aggression in any way.

"I was on a team night out with the whole squad. I am grateful to the club, who have been fully supportive. I would like to publicly thank the Magistrate and the police and, once again, apologise both to them and to the public."