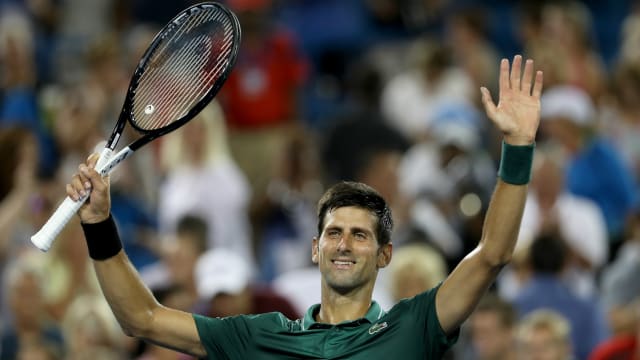 Novak Djokovic was forced to dig deep as he reached the Cincinnati Masters second round, while Andy Murray was a shock casualty.

The 13-time major winner has won every Masters tournament except for the Cincinnati event.

But 10th seed Djokovic got his bid off to a winning start in a hard-fought 6-4 7-6 (7-4) victory over American opponent Johnson.

Next up for 30-time Masters 1000 titlist Djokovic is Adrian Mannarino.

Murray's career has been hampered by a hip injury and the 31-year-old looked rusty on Monday, after skipping the Rogers Cup having withdrawn from the Citi Open quarter-finals.

After Pouille dominated the first set, Murray stormed through the second to level the match, but that was as good as it got for the Scottish star - who was playing just his fourth tournament in 13 months following hip surgery in January.

Ranked 151 after dropping to as low as 263 in June, 2012 Cincinnati semi-finalist Wawrinka has now won three of four matches having tallied a 3-10 record previously.

The comeback of @stanwawrinka continues!

The Swiss edges Diego Schwartzman 6-2 4-6 6-3 to set a round two clash with Kei Nishikori at #CincyTennispic.twitter.com/grCoWhKi3G

"Little by little it's coming back... I expect some ups and downs the next few weeks, months, because I still know that not everything is back," the 33-year-old said. "But the most important [thing] is to keep working, keep doing the right thing, keep pushing in matches, keep winning matches like today. Little by little I'm gaining my confidence. I'm finding a way how to play my best tennis. I'm going to put my fitness back. I still have a lot of work to do, but I'm really positive with where I am right now."

Nishikori awaits in the next round after the Japanese star beat Rublev 7-5 6-3.