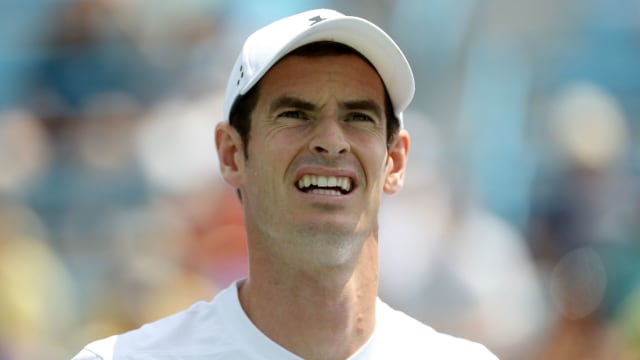 Andy Murray suffered a first-round exit at the Cincinnati Masters as Lucas Pouille emerged victorious from a see-saw clash.

The Briton, who reached the quarter-finals in Washington last time out before withdrawing, was beaten 6-1 1-6 6-4 after ultimately failing to overcome a sloppy start.

Pouille was quick out of the blocks and broke Murray in the first game, the former world number one hitting an ill-timed double fault to fall behind.

The three-time grand slam winner failed to mount a prompt response and was soon on the back foot again on serve, an overcooked forehand giving Pouille another break-point opening.

A lengthy rally that saw a net cord fall kindly for the Frenchman ended when Murray failed with an attempted volley return, and Pouille held again - having been taken to deuce - to move 4-0 up.

The fifth time is the charm for Lucas Pouille.

With Murray clearly struggling to find his range off both wings, Pouille had him on the ropes at 0-40, only for the double Olympic champion to reel off five points in a row.

It was too late to avoid losing the first set, though, with time left for a fifth Murray double fault, but there was a shift in momentum in the second.

This time Murray broke instantly, Pouille the one suddenly having to scramble around the court, and doing so with scant reward as he fell 2-0 behind.

That set the tone for to Murray exact his revenge in style, but he surrendered the initiative as he was broken in a mammoth opening game of the third set.

A huge butterfly caused a brief interruption in between a hold for each player, but Pouille did not feel any adverse effect and soon Murray was serving to stay in the match.

He had to save a match point, but it only delayed the inevitable as Pouille wrapped up the win in the next game, sealed by a ferocious forehand.