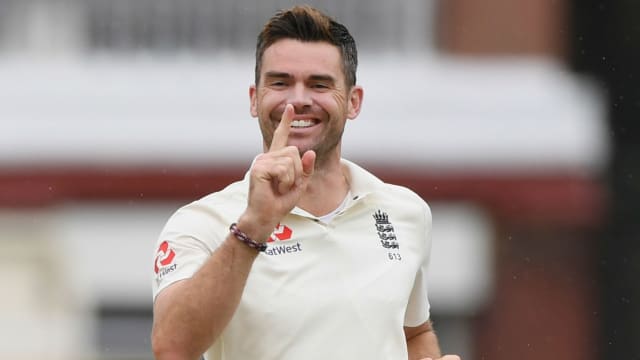 James Anderson has what it takes to continue bowling at the highest level into his forties, according to England coach Trevor Bayliss.

The prolific fast bowler took 9-43 in the second-Test thrashing of India at Lord's, with Anderson having now taken 553 Test wickets.

It is a testament to Anderson's enduring quality that he is still able to produce such stunning displays, having turned 36 last month.

And Bayliss does not envisage having to replace the Lancastrian any time soon.

"As long as he keeps his body fit there's no reason why he can't go on for three or four years," he said.

"He keeps surprising everyone. The last 12-18 months, he had a shoulder problem, but at the moment he seems to have got over that pretty well and he just bowls and bowls and bowls.

"Hopefully that continues for a few years yet. A lot of other bowlers do start to drop off mid-thirties or so. It's only the very, very best that are able to keep it going.

"I think he's showing that he is the very, very best."

Thanks for all the birthday messages yesterday. Happy to spend it doing what I love! These boys make me feel like a 21 year old!! pic.twitter.com/lUxshAjUp4

Anderson - who broke through the 900-point barrier in the most recent bowling rankings, which he leads - forms part of an unchanged England squad for the third Test at Trent Bridge, which begins on Saturday.

The England and Wales Cricket Board confirmed it would await the outcome of Ben Stokes' trial before making a call on his involvement, with jury deliberations due to commence on Tuesday.

Asked whether the players had been distracted by the ongoing legal proceedings, Bayliss said: "The results speak for themselves.

"The guys are able to put anything off field out of their mind and concentrate on what they're doing, and this was the perfect example."