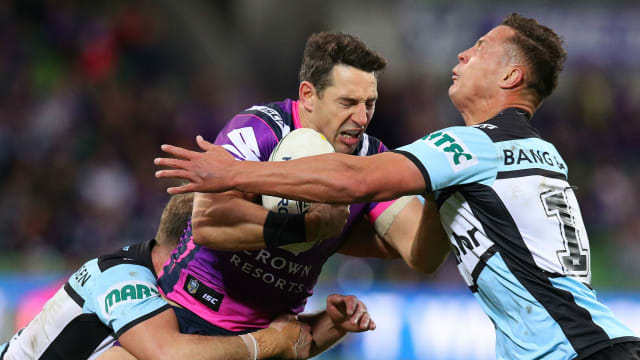 Melbourne Storm tumbled down the NRL ladder after a second consecutive defeat on Sunday, while Wests Tigers kept up the pressure on the top eight.

The Storm headed into last week's mammoth clash with the South Sydney Rabbitohs on top of the ladder, but a loss there was followed by a second to Cronulla Sharks and Melbourne are now in third place, with just a two-point gap down to New Zealand Warriors in sixth.

Cronulla had to survive late Storm pressure to clinch a shock 17-14 away win, set in motion by Jayden Brailey's seventh-minute opener.

Suliasi Vunivalu responded midway through the first half, but Valentine Holmes restored the Sharks' advantage and their accuracy with the boot - including a Chad Townsend field goal - ensured a nine-point lead at the break.

Billy Slater, who announced his imminent retirement this week, brought the Storm back into contention with an early try following the restart, before Josh Dugan crossed to enable Cronulla to pull away once again.

Vunivalu got his second of the night with eight minutes remaining, but Melbourne could not complete a comeback and now face a fight to remain in the top four.

The Tigers survived a rocky second half to secure an away win of their own, 22-20 at Canberra Raiders.

But Josh Papalii's effort just before the interval kept the Raiders in the match and Joseph Leilua and Joseph Tapine - already on the scoresheet in the first half - went over in quick succession to cut the Tigers' advantage to two points.