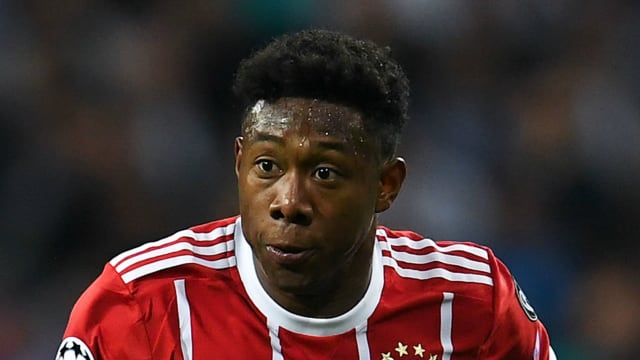 David Alaba sustained a knee injury in Bayern Munich's DFL-Supercup thrashing of Eintracht Frankfurt, with new coach Niko Kovac hoping it is not too serious.

Austria international Alaba appeared to jar his knee in a challenge with Danny da Costa 15 minutes from time in Bayern's 5-0 thumping of Kovac's old club on Sunday.

Bayern, who benefited from Robert Lewandowski's hat-trick, had to see out the closing stages with 10 men as Kovac had already made all his substitutions in the contest.

And the former Eintracht boss, having overseen a crushing defeat of the DFB-Pokal winners, has his fingers crossed test results on Alaba turn out to be positive.

"David Alaba got a knock in his knee," Kovac said to ZDF.

"We don't know anything yet and he will be examined today or tomorrow. But I hope it is only a bruise."

First title of the season - and we're only getting started #fr7 #miasanmia@FCBayernpic.twitter.com/bxdpbuLo9t

Jerome Boateng played no part in the match, with the defender continuing to be linked with a move to Ligue 1 champions Paris Saint-Germain.

"There is nothing new about Jerome Boateng," Kovac added.

"PSG want him but I don't know if he will leave. He is a world-class player and I am happy to have him in my team.

"I have a very good squad and the agony of choice. We could react if Alaba is injured for example but actually I don't need any new players."

Boateng's fellow Germany centre-back Mats Hummels was pleased to get off to a winning start after he and several Bayern players endured a terrible World Cup with Joachim Low's side.

"The title means a lot after the disappointments from mid-April for the club and us internationally," Hummels said.

"We have gone a long way because we wanted to start the season positively. We wanted to win the first competitive game and get the title. That's why we can be satisfied."