Tiger Woods' wait for a 15th major continues after Brooks Koepka secured a two-stroke victory at the US PGA Championship.

Koepka earned his third major title and second of 2018 by finishing 16 under at Bellerive Country Club in St Louis on Sunday.

The 28-year-old - who entered the final round with a two-shot lead - carded a four-under-par 66 to celebrate further major success, having already successfully defended his U.S. Open crown. 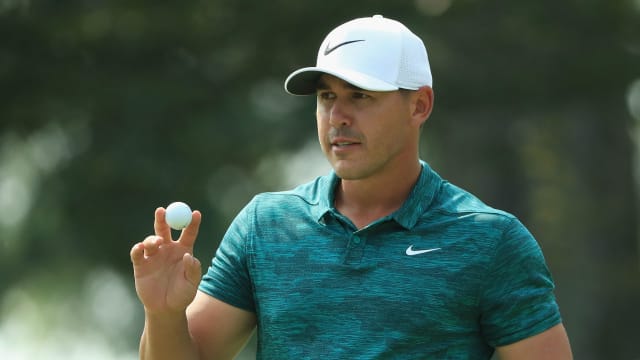 Despite two early bogeys, Koepka was able to hold off former world number one Woods and Australian Adam Scott to hoist the Wanamaker Trophy.

American great Woods finished second at 14 under after an impressive birdie on the 72nd hole, having flirted with victory.

The 14-time major champion, who has overcome serious back problems, fought hard all day, firing a final-round 64 to record his best finish in a major since 2009.

Woods started the week with a bogey and a double-bogey, but electrified the St Louis crowds with a valiant charge afterward.

Would you expect anything else?

Scott, playing with a heavy heart after his fellow Australian Jarrod Lyle died following a cancer battle this week, finished three shots behind in third via a 67 on Sunday.

The former world number one, who won the 2013 Masters, actually had two putters in his bag during the final round.

Adam Scott is feeling it.

Defending champion and Justin Thomas led a group - including Francesco Molinari (67), Thomas Pieters (66) and Gary Woodland (69) - tied for sixth at 10 under.

Jordan Spieth, who was trying to complete his career Grand Slam, shot a four-under 66 to finish eight shots off the pace.

A three-time major champion, Spieth still does not have a top-two finish this season.

Rickie Fowler (71) was also eight under for the tournament, a stroke ahead of Justin Rose (68) and Jason Day (71), while world number one Dustin Johnson slipped to six under following his 69.