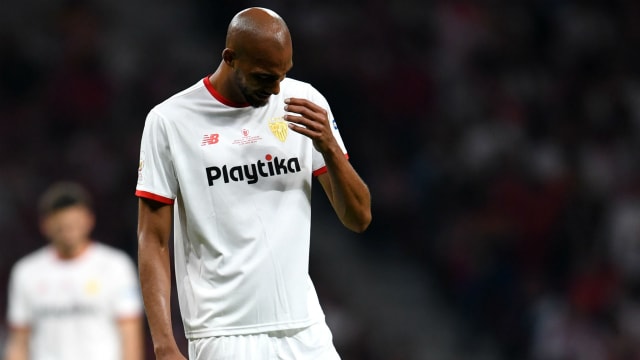 Steven N'Zonzi has made it clear to Sevilla that he wants to be sold, club director of football Joaquin Caparros has confirmed.

The France international has established himself as one of the best midfielders in LaLiga since moving from Stoke City in 2015, his composed nature combined with his ability on the ball earning him plenty of admirers.

N'Zonzi was strongly linked with a return to the Premier League last year, as reports suggested he wanted to go back to England to be closer to his son in London, though no move materialised.

Speculation has again been rife this year since N'Zonzi's participation in the World Cup concluded, with Arsenal, Barcelona and Roma all said to be trailing him, but Sevilla are adamant they will be resisting a sale unless a figure close to his reported EUR35million release clause is received.

"N'Zonzi wants to leave, but he is aware that he has a two-year contract with us," Caparros told Cadena SER.

Steven Nzonzi is a Champion of the World!!!

"I talked to him, I have a good relationship with the player, even during the World Cup we have been in contact and we have not talked about Roma.

"Eventually he can go away, but it is also true that we have told him that he has two years of contract.

"He has become an international and had the chance to be a [world] champion, successes that have arrived for him while at Sevilla.

"He has a clause. If in the end someone will come to ask for the player, that someone knows that there is a clause, or they will have to make an offer that is very close to it. N'Zonzi knows what we want from him.

"He is a footballer who is on the market and knows that he has to bring us an interesting offer for us to look at it, and if he doesn't, then he has two years of contract left."