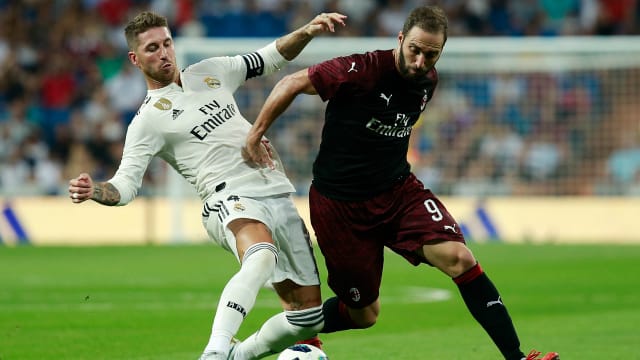 Mayoral's goal came courtesy of a rebound from Luka Modric's intial effort, the Inter transfer target having returned via the bench for his first 15 minutes of action since the World Cup.

However, Thibaut Courtois - a reported EUR39million signing from Chelsea in midweek - could miss Wednesday's clash with city rivals Atletico Madrid after sitting out on Saturday, which enabled Keylor Navas to keep his place in goal.

What a start we had this evening! This is how @Benzema opened the scoring in the Trofeo Santiago Bernabéu! #HalaMadridpic.twitter.com/6v48tH5YWc

Played as a 60th-anniversary tribute to the European Cup final the two clubs contested in 1958, the match began at a pace befitting that five-goal thriller.

An end-to-end contest ensued from there with Gianluigi Donnarumma saving from both Bale and Marco Asensio, before a fast-retreating Carvajal cleared a goal-bound Franck Kessie finish off the line.

And there was further drama to come in the first minute of first-half stoppage time, Bale rifling in what proved the winner when a corner dropped kindly in the box.

Gennaro Gattuso gave Mattia Caldara his Rossoneri debut after the interval but there was to be no second equaliser for the Serie A side, who instead shipped a third late on as Mayoral pounced on a loose ball, Donnarumma having saved impressively in a one-on-one with Modric.