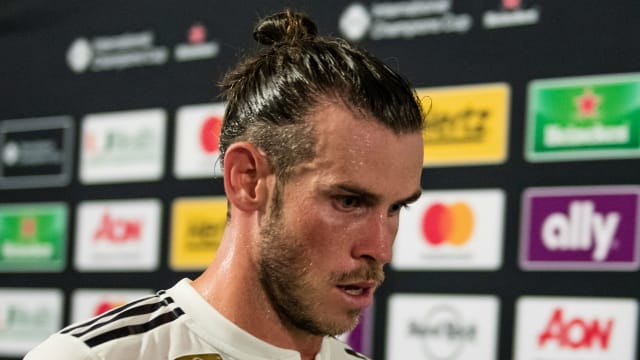 Julen Lopetegui is confident Gareth Bale and Karim Benzema are set to enjoy productive campaigns for Real Madrid in the absence of Cristiano Ronaldo.

Bale has struggled for consistent playing time due to injury problems in recent years, but has led from the front during Madrid's impressive pre-season, scoring in each of the team's last three matches.

And the 29-year-old Wales international is now under pressure to fill the void left by the departure of Ronaldo, who signed for Juventus in July.

"I'm not going to talk about past seasons," head coach Lopetegui told a news conference after Bale struck in the 3-1 win over AC Milan at the Santiago Bernabeu on Saturday.

"The Bale we have now is committed, content, wanting to have a great season. He is training very well, happy, and we are so happy with him. This has only just begun."

The 30-year-old's work-rate and all-round contribution remains an important asset to Madrid, though, and Lopetegui is looking forward to getting the best out of the French forward, who opened the scoring against the Rossoneri.

"With Benzema we are happy," he said.

"He trained very well, he is in great form, excited and enthusiastic. Surely he will help us in all facets, not only with his goals. He contributes a lot to the team and we are happy for what he does."

Dani Ceballos, Sergio Reguilon, Vinicius Junior and Federico Valverde were among the promising newcomers introduced off the bench against Milan, leaving Lopetegui encouraged by the options at his disposal.

"We are delighted with all the young players we have here," he said.

"They have played a very good preseason. The young players' contribution gives energy and Real Madrid has needs youth and enthusiasm.

"There is still pre-season to finish off with the squad and we will make decisions."