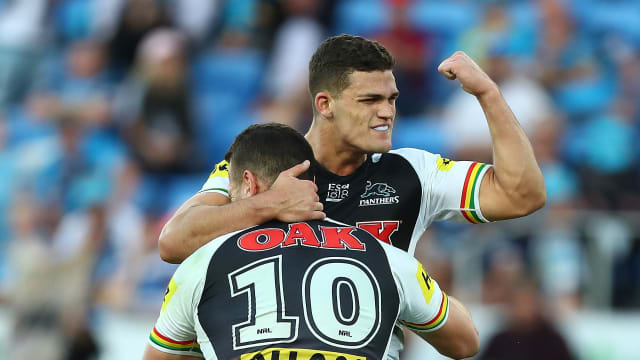 Penrith Panthers kept their quest for the NRL Finals on track with an extra-time victory over Gold Coast Titans as Nathan Cleary made amends for a late missed conversion.

Twice the Panthers had to come from behind as the Titans led 6-0 and then 16-6 at Cbus Super Stadium, with Cleary beginning their second fightback with a 75th-minute try.

His score put the Panthers within a converted try of victory and Cleary had the chance to secure that after Dallin Watene-Zelezniak crossed in the closing seconds.

However, Cleary - who took himself off social media earlier in the week amid speculation about his dad Ivan's future at Wests Tigers - missed what appeared to be a relatively easy kick and the game finished 16-16 in normal time.

In the first half of extra time the 20-year-old made no mistake, though, slotting a drop goal to give Cameron Ciraldo a 17-16 victory on his coaching debut.

The Panthers sit fourth in the ladder with three games of the regular season remaining, Penrith two points clear of St George Illawarra Dragons after they suffered a shock defeat to a Jarryd Hayne-inspired Parramatta Eels.

Hayne ran in a first-half hat-trick despite getting a boot to the jaw early on, the full-back needing extensive bandaging to enable him to continue.

It did not faze him as he helped Parramatta to a 22-0 lead at half-time, the Dragons' day made worse by the early exit of Gareth Widdop with a dislocated right shoulder.

The one-way encounter continued after the restart as Parramatta boosted their hopes of avoiding the wooden spoon with a 40-4 win.

Half time and Hayne has three!

Meanwhile, Manly Sea Eagles made it two wins in-a-row with a comprehensive 18-6 victory over Canterbury Bulldogs.

The Sea Eagles trailed by two at the break but turned on the style in the second half to score 14 unanswered points and lift themselves above their opponents.