US PGA washed out as Woodland continues to lead 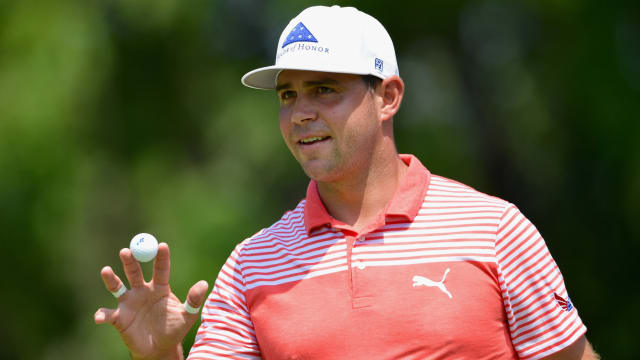 Gary Woodland remained atop the US PGA Championship leaderboard when the second round was suspended due to inclement weather.

After a two-hour delay, play was washed out on Friday and will resume at 08:00am on Saturday, with more than 70 golfers still needing to finish their rounds.

Before the wet weather, Woodland carded a four-under-par 66 to be one shot clear of Kevin Kisner at Bellerive Country Club.

Woodland was fortunate to play in great conditions under sunny skies with very mild wind - the American and three-time PGA Tour champion holing an eagle, four birdies and two bogeys in St Louis.

"The golf course is good," Woodland said. "Get in the fairway, the greens are still soft enough you can still attack. The key is get the ball in the fairway and attack from there.

"I mean, you could definitely tell the greens were a little fresher this morning, which was nice to get out on fresh greens."

American Koepka provided the early morning highlight after jumping 30 spots with a record-low round of seven-under 63 on the par-70 course to be two shots off the pace.

He tied a PGA Championship best along with South Africa's Charl Schwartzel, who moved 44 places up the leaderboard after his own 63.

Johnson is a stroke further back following his second-round 66, which included a flurry of five birdies in six holes to close in on Woodland.

The afternoon saw big names like Rickie Fowler, Jason Day and Tiger Woods -- all of whom will continue their second round on Saturday.

Fowler was through 10 holes and level on seven under with Johnson, Schwartzel and Thomas Pieters when the rain set in.

Former world number one Day managed eight before prior to the delay, while Woods - who failed to make the cut at both the 2014 and 2015 PGA Championship, barely got started.

Clean card remains intact.@TigerWoods grinds out a par on the 6th hole.#PGAChamppic.twitter.com/KRxb3P7nt9

Woods - through seven - opened with three birdies in his first five holes to be three under alongside Jordan Spieth, who is chasing a career Grand Slam.

Defending champion Justin Thomas (through seven) will start Saturday at two under, while Rory McIlroy - who also played seven holes - dropped to even par overall as Sergio Garcia (71) and Patrick Reed (71) face the cut.