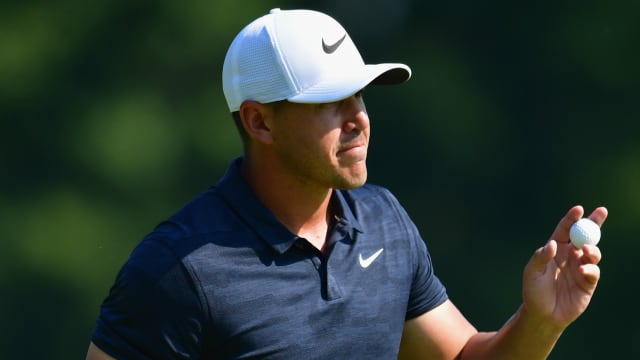 U.S. Open winner Brooks Koepka is targeting a second major title in 2018 after equalling the lowest round at the US PGA Championship on Friday.

American Koepka carded a record-equalling 63 to move within two shots of leader Gary Woodland at the storm-affected tournament in St Louis.

Capitalising on perfect conditions at Bellerive Country Club, Koepka and South Africa's Charl Schwartzel went seven under on the par-70 course before the second round was suspended due to inclement weather.

Wow. @BKoepka just tied the lowest round in the history of the #PGAChamp.#LiveUnderParpic.twitter.com/7myyVidYVB

"I think the double we had, we hit a six-iron, great six-iron, the wind just kind of switched on us and that happens. But today I drove it beautifully, my wedge's distance control is very spot on, and making the putts, making those five, six-footers that you need to make.

"It would be special," Koepka said when asked what it would mean to cap the tournament off with a win.

"Any time you can win two majors in a year, that's pretty unique, pretty special. And especially where I started the season.

"Missing the Masters and only being able to play three this year is quite disappointing, but trying to make the most of it."

Koepka is eight under heading into the third round, a shot ahead of world number one Dustin Johnson and Schwartzel.

After opening with a 67, fellow American Johnson shot a four-under-par 66 to climb the leaderboard.

"I'm definitely wanting to get that second major," Johnson said. "I'm in a good position going into the weekend, I'm going to have to play a good 36 holes though if I want to have a chance to win."

Meanwhile, Schwartzel - whose solitary major came at the 2011 Masters - said: "It's about time. There's been ups and downs, and I just feel like I'm starting to play a better golf game."