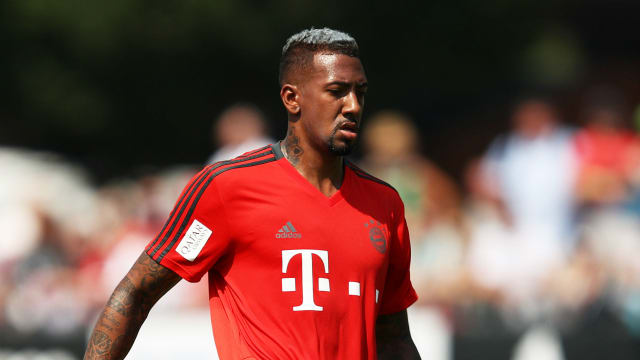 Niko Kovac is confident Jerome Boateng will remain a Bayern Munich player despite the Germany international being heavily linked with a move away from the Bundesliga champions.

A transfer to Manchester United had been mooted before the Premier League deadline passed, while Boateng is also said to be a target for Paris Saint-Germain.

Reports in France suggested the 29-year-old had agreed terms with PSG, however Kovac expects his squad to stay intact beyond August.

"I can't tell you what's going to happen, but I am very confident about Bayern considering the way the team is conducting itself," Kovac - who confirmed Boateng could feature in the DFL-Supercup against Eintracht Frankfurt this weekend - told a media conference on Friday.

"Right now, I am just assuming all the players will be here in September.

"I am very comfortable about the situation, the squad is complete."

Arjen Robben expressed his desire for Boateng to stay at the Allianz Arena on Thursday, describing his team-mate as "one of the best defenders in the world".

Kovac was delighted to see the Dutchman air his views, suggesting it shows how strong the unity is within the Bayern squad.

"Of course, they are all individuals, they are fighting for their careers, but if we can unify and unite them that's a good sign. So, I am happy about these statements."

#Kovac: "@SergeGnabry trained as normal today, so there are no problems for Sunday. He's very versatile and has played a number of positions in pre-season. I won't reveal where he will play in the #Supercup." #SGEFCBpic.twitter.com/WzJKc8sZQh

Sunday's clash with Frankfurt sees Kovac come face-to-face with his former club, but he expects a warm reception at the Commerzbank-Arena.

"It really is a special game for me," he added. "It is a return for me to where I just worked, it is a great city and a great club.

"I do not know what to expect in Frankfurt, but I think that the fans will respect what we achieved together. It was a good time and the DFB-Pokal win was a perfect end.

"But it is also the first title of the season and we want to win that title.

"A lot of people say the Supercup is not important, but I have a very different opinion. For me it is an important title. I hope for a successful weekend, we're going to travel to Frankfurt to try to win and collect that trophy."