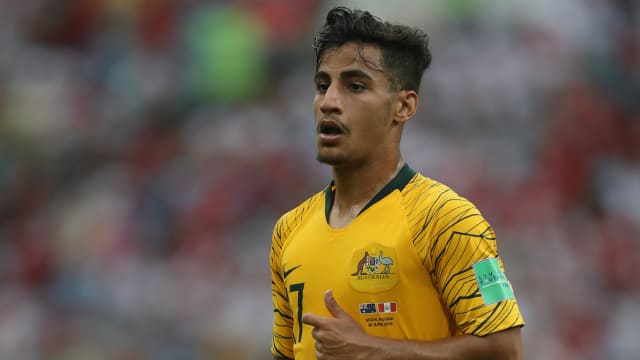 Australia head coach Graham Arnold has backed Socceroos sensation Daniel Arzani to flourish at Celtic ahead of his proposed moved to the Scottish champions.

Arzani is poised to join Celtic on a two-year loan deal from Manchester City after the Premier League titleholders reportedly agreed a deal with sister club Melbourne City in Australia.

The 19-year-old winger - who featured at the World Cup in Russia - was in the stands for Celtic's 1-1 draw against AEK Athens in Champions League qualifying on Wednesday.

Asked about Arzani's imminent transfer, Arnold - speaking for the first time since his appointment prior to the World Cup - told reporters on Thursday: "It's a big move for the kid. He's a very intelligent kid. He knows what his plans is.

"The most important thing, and he's aware of that, is wherever he goes he has to play.

"He believes in himself a lot. He believes going to Celtic he will get to play more games in Scotland and being part of a Champions League squad than he probably would here in Australia.

"I'm sure he will do exceptionally well."

Arnold was announced as Ange Postecoglou's replacement before Russia 2018, however, the ex-Sydney FC boss watched from afar as interim coach Bert van Marwijk led the Socceroos at the tournament.

Now free to take control, Arnold added former Manchester United coach Rene Meulensteen to his staff, and the 55-year-old has tipped a bright future for Australia.

"I went and watched an under 17's camp the other day...I've seen stuff I've not seen in Australian football. The kids are coming," Arnold said.

"Technically we have the quality, I do believe that. I'm so excited about the future. It's about giving them the opportunity. We are doing everything we can to make the opportunities right for the kids.

"The kids are coming...we have to believe it and I can see it. We're going to the next World Cup expecting to win games."