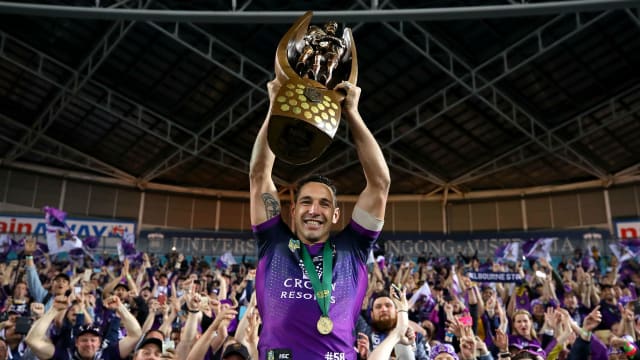 Melbourne Storm and Queensland Maroons icon Billy Slater will retire from rugby league at the end of the NRL season.

The 35-year-old has been a mainstay for Storm since making his debut in 2003, winning two NRL premierships, one Dally M Medal as the competition's player of the season and two Clive Churchill Medals, awarded to the best player in the Grand Final.

The fullback has also won the State of Origin eight times during a period of dominance for Queensland.

Storm's trio of veteran superstars had already begun to break up, Cooper Cronk's departure to Sydney Roosters leaving Slater and captain Cameron Smith to help Craig Bellamy's team to second on the ladder in his absence.

Slater, who recovered from a serious shoulder injury suffered in 2015 to return to the highest level, could yet bow out with another premiership if Storm can weave their customary magic in the upcoming finals.

"Two years ago I nearly retired because of injury, that would have sunk me. I am grateful my body is still allowing me to play," he told a news conference in Melbourne on Wednesday.

"Going through those tough times made the good times a lot better."

Of the other members of Storm's 'Big Three', he said: "Cameron Smith and Cooper Cronk, you both pushed me to be the best I can be. You two are the biggest reason I became the player I am - thank you for everything."