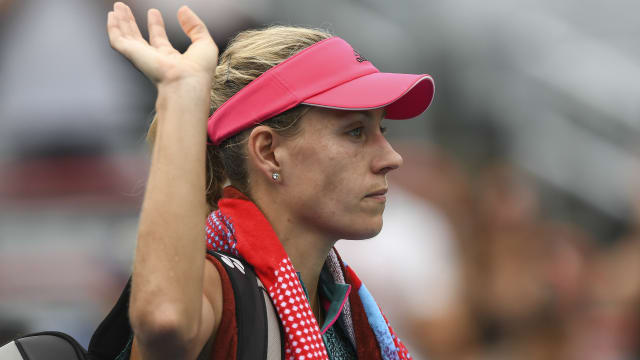 German fourth seed Kerber was surprisingly bundled out of the Premier 5 tournament by Alize Cornet in straight sets on Wednesday.

World number one Simona Halep was trailing Anastasia Pavlyuchenkova 4-3 when the rain hit and never stopped in Montreal, while Victoria Azarenka's match was also interrupted, with Caroline Wozniacki unable to take to the court.

The three-time grand slam champion hoisted the Wimbledon title aloft last month but she came crashing down to earth midweek.

Kerber lost 6-4 6-1 to unseeded Frenchwoman Cornet, who posted her 17th win over a top-10 opponent.

.@alizecornet moves on in Montreal!

A total of 32 unforced errors contributed to Kerber's shock elimination.

"It was my first match after three weeks now," Kerber said. "It is always not so easy to change also the surface. I think I need a little bit more time to get used to hard court again, to have a lot of matches, a lot of practice sessions on hard."

A retirement helped fifth seed Svitolina reach the third round of the Rogers Cup.

Svitolina was leading 6-3 6-7 (5-7) 4-3 when Mihaela Buzarnescu retired due to an ankle injury which forced the Romanian to leave the court on a wheelchair.

Unfortunately @MikiBuzarnescu has been forced to retire due to injury.

Sharapova - a 2009 semi-finalist - needed an hour, 16 minutes to dismantle the French Open and Wimbledon quarter-finalist.

The 31-year-old will face sixth seed Caroline Garcia for a spot in the quarter-finals.

"It's a different opponent, with a really big serve - one of the biggest on tour," Sharapova said of Garcia. "So I'll have to be sharp on the return. I lost to her the last time we played in three long sets, so I'm looking forward to this match and hoping I can do a few things better."

STEPHENS CRUISES INTO ROUND OF 16

Abanda stunned Kirsten Flipkens to earn a meeting with Stephens but the Canadian was outclassed on Court Central.