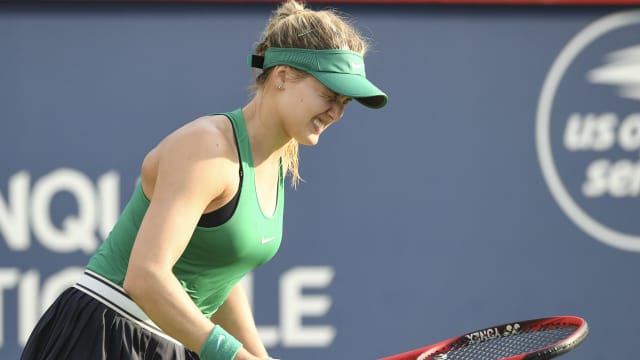 Dangerous floaters Maria Sharapova and Victoria Azarenka reached the second round of the Rogers Cup on Tuesday, as Petra Kvitova headlined the seeded players to progress in Montreal.

World number 22 Sharapova dispatched the unheralded Sesil Karatantcheva with ease, while Azarenka was a surprisingly dominant winner against Kristina Mladenovic.

After receiving a bye, Kvitova saw off the challenge of Anett Kontaveit to sail into the third round, but her fellow seeds Jelena Ostapenko and Naomi Osaka were among the tournament's early casualties.

Eighth seed Petra Kvitova, the 2012 winner of this event, had relatively little trouble accounting for Kontaveit, beating the Estonian 6-3 6-4.

Ashleigh Barty, seeded 15th, needed three sets to get past Irina Camelia Begu, while Julia Goerges (10) and Caroline Garcia (6) had to come from behind to see off Lucie Safarova and Magdalena Rybarikova respectively.

.@Petra_Kvitova secures the win over Kontaveit!

Montreal-born Eugenie Bouchard was unable to deliver a crowd-pleasing home victory in her first-round match.

Francoise Abanda succeeded where Bouchard could not, though, the Canadian world number 191 upsetting Kirsten Flipkens in straight sets.

SHARAPOVA MAKES UP FOR LOST TIME

Maria Sharapova's opening match was suspended due to rain late on Monday, but that did not disturb the former world number one's rhythm.

As expected, the Russian, a beaten Rogers Cup finalist in 2009, dispatched world number 229 Karatantcheva 6-1 6-2 to progress.

Victoria Azarenka had to withdraw from the quarter-finals in San Jose last week, but the two-time Australian Open winner was back with a bang on Tuesday.

The Belarusian breezed past Kristina Mladenovic of France 6-0 6-1 in just 56 minutes.

.@vika7 cruises past Mladenovic, 6-0, 6-1, and into the second round of the @CoupeRogers! pic.twitter.com/vSLJX4fA5n