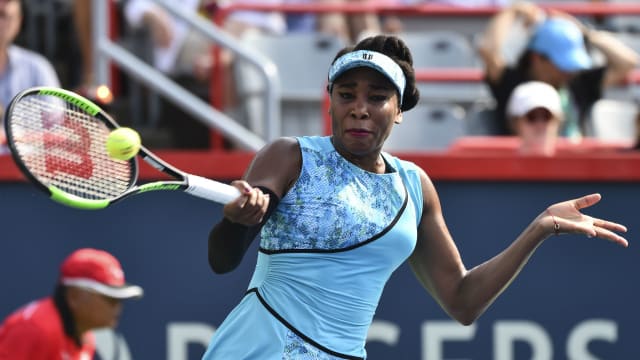 Seeds Venus Williams, Karolina Pliskova and Julia Goerges all advanced to the second round of the WTA's Rogers Cup on Monday, as rain curtailed the schedule in Montreal.

A beaten finalist at this event in 2014, Williams' experience told against her teenage compatriot Caroline Dolehide in the WTA Premier 5 tournament, the 38-year-old winning in straight sets.

Pliskova and Goerges also progressed on the outdoor hard courts in Quebec, but Maria Sharapova will have to wait to join them, as bad weather interrupted the 31-year-old's match in the first set late on the opening day in Canada.

World number 124 Dolehide announced herself as a potential threat to the WTA's best when she ran Simona Halep close at the BNP Paribas Open.

And the 19-year-old American produced a competitive showing against seven-time grand slam singles champion Williams, particularly in the first set, although the 13th seed ultimately asserted her authority to win 7-5 6-1.

"I think she had a really great second serve," Williams said.

"I think I got a better feel for it in the second set. In the first set, I was still figuring it out. I hadn't really seen her play."

It was Pliskova's first competitive outing in nearly a month after she took time off mid-season to get married in Monaco.

.@KaPliskova opens up about her small "surprise" wedding last month in Monaco --->https://t.co/8hogW3eDF7pic.twitter.com/eHY3UXtibV

"I have to say, she played an amazing match," Goerges said.

"She didn't give me a lot of opportunities to come back, especially in the first set, where I didn't even have a break point. I think I managed to fight and believe in my chances. I'm very glad I worked it out and got through to the second round."

Earlier, there were straight-sets wins for Anastasija Sevastova and Lesia Tsurenko.

Periods of rain on Monday affected both the WTA event in Montreal and the ATP edition of the Rogers Cup in Toronto.

Tatjana Maria was beating Alize Cornet 6-4 1-2 when their match was suspended until Tuesday, with fourth seed Angelique Kerber awaiting the winner.

And former world number one Sharapova suffered the same fate. The Russian led world number 229 Sesil Karatantcheva 4-1 in the opening set when organisers called a halt to the day's proceedings, while some scheduled contests did not even begin.