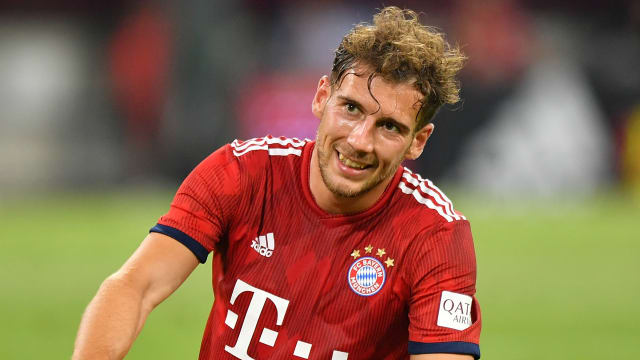 Leon Goretzka took satisfaction in a successful Bayern Munich debut as his new side warmed up for the DFL-Supercup with a 1-0 win over Manchester United on Sunday.

The Bundesliga champions eased to victory at the remodelled Allianz Arena - which sported a fresh seating design - with Javi Martinez's second-half header deserved reward for a dominant display.

Manuel Neuer, Robert Lewandowski and Mats Hummels were among the World Cup participants to return a week out from the season curtain-raiser against Eintracht Frankfurt, while Goretzka was given his first 45 minutes for the club.

The 23-year-old midfielder completed a free transfer from Schalke in July and was pleased to help deliver a second pre-season win for new boss Niko Kovac.

"I think we accomplished what the coach wanted from us," Goretzka told reporters.

"First of all, it was fun today. I am really happy to make my debut in front of - I don't really know if it was sold out - but it was a great atmosphere and a great opponent. And we won the game, so it's all good."

He faces a tough task to break into a competitive midfield, but with nine league goals over the past two seasons, the former Bochum man looms as a useful weapon for Kovac.

Goretzka admitted his slight disappointment over failing to get on the scoresheet against an under-strength United as he aims to earn a starting spot.

"Yes, it's a pity. In my debuts for my previous clubs I often scored and I had the chance today, but there are more important moments this season than today," he said.