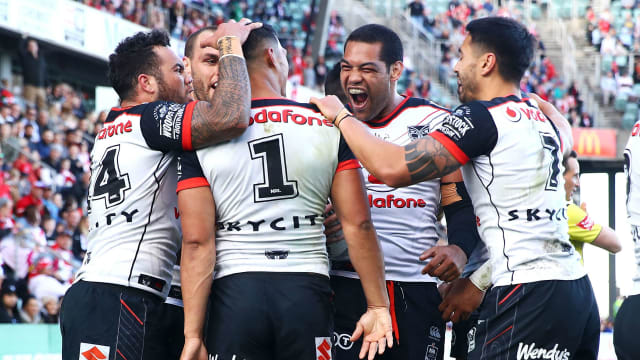 New Zealand Warriors took a huge stride towards the NRL finals as they won 18-12 at St George Illawarra Dragons on Saturday.

Having last played in the post-season in 2011, the Warriors moved closer to a return by going level on points with Penrith Panthers, Cronulla Sharks, who both have a game in hand, and Brisbane Broncos.

Wests Tigers' victory over Newcastle Knights on Friday had closed the gap to the eighth-placed Warriors to two points, but their cushion was restored as the Dragons struggled with Matt Dufty's sin-binning and an injury to Paul Vaughan.

The visitors scored three tries - including a brace from Solomone Kata - in the 10 minutes followed Dufty's yellow card, with quickfire second-half tries from Cameron McInnes and Luciano Leilua unable to overturn the deficit.

Elsewhere, Sydney Roosters held off a second-half fightback from North Queensland Cowboys to cling on for a 26-20 win.

Latrell Mitchell was in inspired form for the Roosters and scored the opening try, before Blake Ferguson and Daniel Tupou crossed in the space of five second-half minutes to seemingly put Sydney out of sight.

The Cowboys rallied through the talismanic Johnathan Thurston and Gavin Cooper, but ultimately fell just short of a turnaround.

Jarryd Hayne scored one try and created another in a frantic first half as Parramatta Eels defeated his former side Gold Coast Titans 28-12.

The Eels trailed just over midway through the opening period after Anthony Don and Phillip Sami tries overturned Tim Mannah's opener, but Hayne came to the fore and crossed before teeing up Bevan French two minutes later.

George Jennings added to Parramatta's advantage ahead of the break and, although Don got a second following the restart, Corey Norman's late try made sure of a rare win for the strugglers.