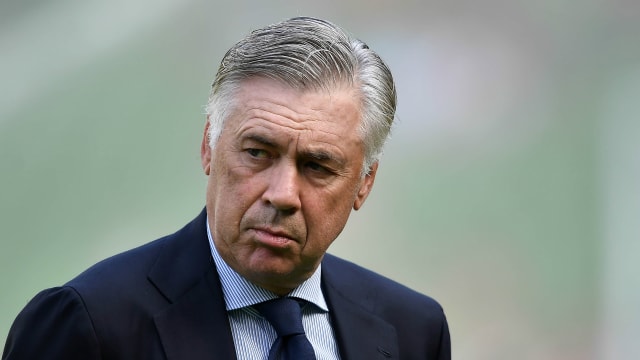 Napoli say Carlo Ancelotti was not expected to appear at a news conference after his team were thrashed by Liverpool in a friendly on Saturday.

Ancelotti spoke to Italian television channel Sky Sport but did not attend the post-match media conference after a 5-0 hammering in Dublin.

James Milner and Mohamed Salah starred as Napoli struggled to cope with the attacking fluency of the Champions League finalists.

However, Napoli insisted Ancelotti's absence from post-match media duties was not due to the manner of his side's heavy loss at the Aviva Stadium.

"Mr Carlo Ancelotti did not attend the post press conference after Liverpool v Napoli for a simple reason: it was not planned," the club posted on Twitter.

"The only [media] activity in the program was the interview with Sky Sport and has been respected."

The Napoli coach, who has replaced Maurizio Sarri, is not panicking despite his side being ruthlessly beaten by Liverpool.

"To lose always burns and to concede five goals must bother us," Ancelotti said in his Sky Sport interview.

"We tried to play it openly, with the guys we are doing a job a bit different than in the past and we have lost the ball so many times.

"After the difficult start we were at their level, but we were exposed to the counter-attack, which is their best weapon.

"It takes some time for things to become natural and I also believe that some things have been done well.

"We could have played a more defensive game but I did not want to do it, we do not need it, because we have to build against a team like Liverpool."

Napoli are next in action against Borussia Dortmund and Wolfsburg in further friendlies before their Serie A season starts at Lazio on August 18.