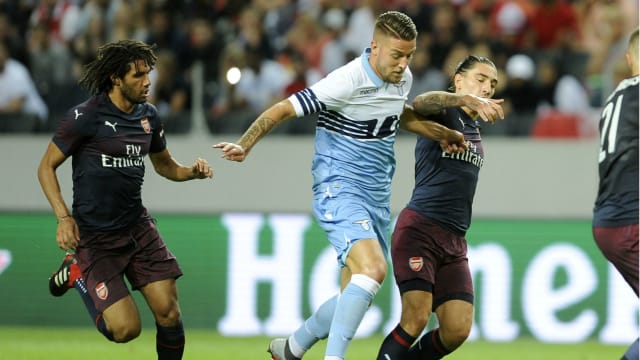 Arsenal concluded their pre-season preparations with a comfortable 2-0 win over Lazio in Stockholm.

Youngster Reiss Nelson found the breakthrough after 18 minutes, while the result was seldom in doubt after Pierre Emerick-Aubameyang marked his second-half appearance by finding the bottom corner in the 64th minute.

New signings Lucas Torreira and Stephan Lichtsteiner made their first Gunners appearances and the latter found Alexandre Lacazette with an early lofted pass - Silvio Proto saving the France international's volley at his near post.

The midfielder drove forward towards the Lazio defence and was on hand to finish the move when Alex Iwobi's low strike from the left came back off the base of the far post.

Emery and his players head into next weekend's mouth-watering Premier League opener against champions Manchester City with their only pre-season blemish a penalty shoot-out defeat to Atletico Madrid.

Aubameyang made sure of the win when he clipped home via a deflection after Mohamed Elneny burst through a pair of Lazio challenges.

We lead 2-0 at the Friends Arena - and this is how Auba doubled our advantage.

Watch it LIVE on https://t.co/4KJlfKW7rt and the Arsenal App pic.twitter.com/EvVyuFSGRg