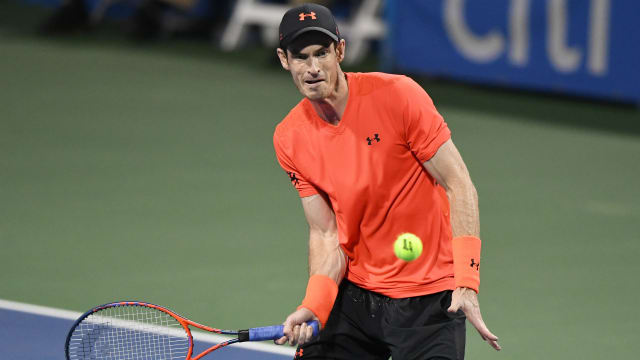 Andy Murray survived a scare to continue his comeback from injury at the Citi Open in Washington on Thursday.

The former world number one, who has been sidelined for much of the last year due to a hip problem, fell a set down against world number 93 Marius Copil.

The 31-year-old was left sobbing in his chair after overcoming the latest three-set marathon of the tournament.

Up next for Murray will be a meeting with rising Australian star Alex de Minaur, who came from a set down to upset South Korean Hyeon Chung 2-6 6-4 6-2.

Earlier, defending champion Alexander Zverev won a meeting with brother Mischa Zverev 6-3 7-5, beating his older sibling for the first time in three official attempts dating back to a qualifying encounter in Dallas in 2012.

The Battle of the Brothers goes the way of Sascha Zverev 6-3 7-5.

The younger Zverev, ranked third in the world and seeded first for this ATP 500 event, will face 2015 champion Kei Nishikori in the last eight, the Japanese seventh seed having overcome Canada's Denis Shapovalov 7-6 (7-1) 6-3.

Third seed David Goffin made short work of American Francis Tiafoe, winning 6-0 6-3. The Belgian will take on Stefanos Tsitsipas for a place in the last four.

His reward is a meeting with Andrey Rublev, who got past John Isner's unlikely conqueror Noah Ruben in straight sets.