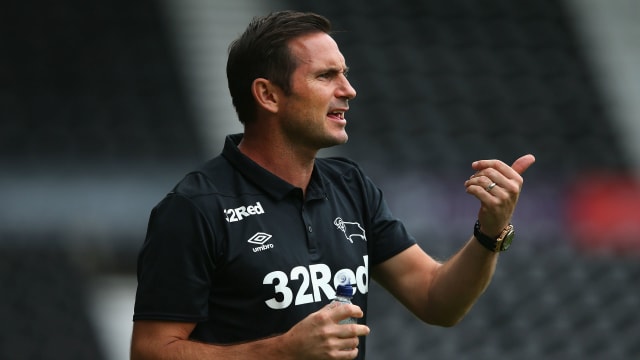 The Championship kicks off on Friday with a clash between Reading and Derby County, one that has taken on a new level of global intrigue after the appointment of Frank Lampard.

The 40-year-old is taking his first steps into management and has certainly embraced a challenge with the Rams, who have flirted with promotion back to the Premier League in recent seasons without quite making the grade.

Lampard's odyssey would be the dominant talking point ahead of 2018-19, were it not for the fact Marcelo Bielsa has taken up residence at Elland Road.

With new bosses in place at Stoke City and Swansea City and uncertainty around Aston Villa's future, we should be in for a terrific campaign...

LAMPARD STILL ADJUSTING TO THE DUGOUT

Former West Ham, Chelsea and England star Lampard was appointed by Derby in May and will be charged with leading their charge to promotion after a succession of painful near misses in recent seasons.

Harry Wilson and Mason Mount have arrived on loan at Pride Park from Liverpool and Chelsea respectively to reinforce an ageing squad.

And Lampard may need to feed off the youthful energy of the duo as he learns to cope with the additional pressure that comes with occupying the hot seat.

Speaking ahead of the season-opening clash away to Reading on Friday, he said: "To go by the last month, I probably won't sleep very well - management does bring lots of different issues [compared to] as a player.

"[Being] a player is easy, you can be pretty selfish, leave the training ground and go home to your own life.

"As a manager you take full responsibility everywhere you go, so you do wake up in the night sometimes and very quickly you're thinking about tactics and players etc.

"That's been the case but I'm very, very happy to be in this role and that comes with the territory. I can't promise that Thursday night will be a good night's sleep, but I'll be ready come Friday night."

Frank Lampard is ready to give everything for #DCFC.

CAN BIELSA AND LEED FIND ORDER IN THE CHAOS?

Derby are not the only Championship side with an intriguing new face on the touchline, as former Argentina, Chile and Athletic Bilbao coach Bielsa becomes the latest man to take on the unforgiving role of Leeds United boss.

Known for demanding an extraordinarily high work rate from his players, Bielsa's most recent posts with Marseille and Lille failed to deliver the success he achieved at San Mames.

And a bizarre two-day spell at Lazio in 2016 demonstrates the 63-year-old's capacity to match the volatility that has become the norm behind the scenes at Elland Road.

ROWETT AND POTTER WITH POINTS TO PROVE

Lampard's Derby predecessor Gary Rowett has brought in Tom Ince, James McClean, Benik Afobe and Ashley Williams as he seeks to get Stoke City back into the Premier League at the first attempt.

Fellow relegated side Swansea City have endured a less encouraging pre-season under Graham Potter, appointed following his impressive work with Ostersunds, the Swedish side who surprised Arsenal with a 2-1 win at Emirates Stadium in the Europa League last term.

Although he was unable to save West Brom from relegation, Darren Moore has been offered the chance to continue the progress he made since succeeding Alan Pardew at the Baggies late last term.

Having lost in the 2017-18 play-offs, Aston Villa and Middlesbrough under Steve Bruce and Tony Pulis respectively could threaten again, although financial problems at Villa Park have hindered the preparations of last term's beaten finalists.

Big things will also be expected of Aitor Karanka at Nottingham Forest, the eye-catching arrival of Joao Carvalho from Benfica for a fee of £13.2million an indication of the ambition at the City Ground this season.

@Karanka keen for a positive start.

Aitor Karanka said he is looking for a strong start from his #NFFC side when the new season gets underway at @BristolCity on Saturday.#ThatLovingFeelingpic.twitter.com/1fzYerMC4Q