Pirlo, Baggio, Inzaghi - the best XI to play for Juventus and AC Milan 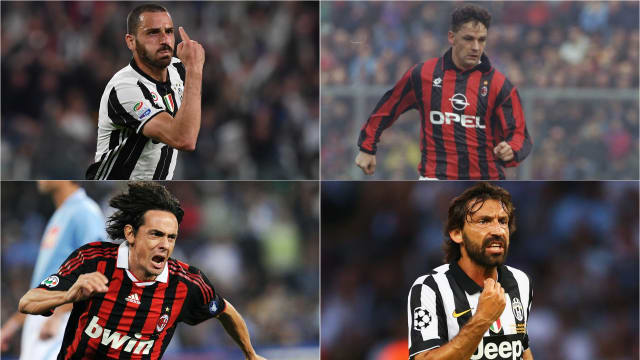 One of the transfer window's most complex deals has reached a successful conclusion, with Gonzalo Higuain and Mattia Caldara joining AC Milan and Leonardo Bonucci returning to Juventus.

Italy's two most successful clubs do not always see eye-to-eye, but the agreement involving this trio could end up being one of the most mutually successful pieces of business they have done.

It also means Higuain and Caldara will join a surprisingly substantial list of players to reside on the books of both clubs, stretching way back into the early part of last century.

In honour of the deal being done, we present an all-time best XI comprising footballers to wear the famous Bianconeri and Rossoneri jerseys. And we think it would be pretty good...

36 - Gonzalo #Higuain is the player to have scored the most goals in a single Serie A campaign (36 goals). Pipita. pic.twitter.com/OA8sj4le67

Storari did not reach Italy's top tier until the age of 27, when he was signed by Messina. AC Milan snapped him up four years later in 2007, but, unable to dislodge Dida or Christian Abbiati, he left for Juve in 2010 after several loan spells.

Okay, he was largely a back-up to Gianluigi Buffon in Turin, but he still managed 43 Serie A appearances as they won four titles in a row. He rejoined Milan in January 2017 for a further 18 months.

An undisputed Italy great and a 2006 World Cup winner, Zambrotta won back-to-back Serie A titles with Juve in seven successful years before leaving for Barcelona in the wake of the Calciopoli scandal.

Two years later, he was back in Serie A with Milan, where he won a third Scudetto during a four-year spell. He ended his career with Chiasso in Switzerland.

Six Scudetti, three Coppe Italia and two Champions League finals in seven years is a decent career by anyone's standards, even at a club like Juve. Perhaps that's why his EUR42million move to Milan last year provoked so much bitterness.

Well, Bonucci evidently did not burn his bridges entirely. After a season as Rossoneri skipper, the Italy star is back in Turin, ready to defy critics and the ageing process and re-forge a partnership with Andrea Barzagli and Giorgio Chiellini.

A Milan youth product, Salvadore won two Scudetti in four years before heading to Juve, where he cemented his place as one of the great Italian defenders of the age.

Two more league titles and a Coppa Italia followed in a 12-year career in Turin, during which time he became Italy captain, made it to two Word Cups and won the Euro 68 trophy.

Orlando only spent one season each with Milan and Juve in a nomadic career, but they were suitably successful ones.

The full-back won Serie A, the Supercoppa Italiana and the Champions League in 1993-94, before heading to Juve to win the domestic double in the following campaign.

One of the finest modern products of Ajax's fabled youth system, Davids' first foray in Italian football was with Milan in 1996.

He spent just two years at San Siro before a switch to Juve, where 'The Pitbull' won three Serie A titles and reached the 2003 Champions League final. That defeat came to Milan, of course.

Vieira only made two senior appearances for Milan, but the talent of this rising France star was clear to see and nine fantastic years at Arsenal soon followed.

In 2005, he headed to Juventus and won the Serie A title at last, although it was revoked after the Calciopoli investigation. Undeterred, he went to Inter and won four of them in a row.

Another to play for Milan, Juve and Inter, Pirlo left the Nerazzurri for their city rivals in 2001 and was an integral part of the last great Milan dynasty, winning two league titles and two Champions Leagues (oh, and the World Cup in 2006).

In a decision up there with Dick Rowe's (alleged) refusal to sign The Beatles, Pirlo was deemed past his best and allowed to leave for Juve on a free transfer in 2011. He won a further four Scudetti in a row.

'The Divine Ponytail' caused riots in Florence when he joined Juve from Fiorentina for a world-record fee in 1990, and made matters worse by having the temerity to lead them to UEFA Cup, Serie A and Coppa Italia triumphs.

After being displaced by rising star Alessandro Del Piero in 1995, Baggio left for a two-year spell with Milan, winning a further league title. This time, there were protests from the Juve fans.

Four ruthless years with Juve yielded three trophies and a genuine fear among defenders that poacher-supreme Inzaghi had somehow found a loophole in the offside rule.

He left for Milan in 2001 and won eight major titles, including two Scudetti and two Champions Leagues before retiring in 2012 and later becoming Milan head coach. He took over at Bologna last month.

Although his best years were indisputedly at Inter, we could not overlook the man after whom Milan's hallowed stadium is named.

A double World Cup winner and one of Italy's greatest ever footballers, Meazza reached the Coppa Italia final in 1942 in his second season with Milan, before spending one year with Juve.

There are five subs who we simply could not ignore: Christian Abbiati, Nicola Legrottaglie, Aldo Serena, Christian Vieri and Zlatan Ibrahimovic are all unfortunate not to make it into the starting line-up.