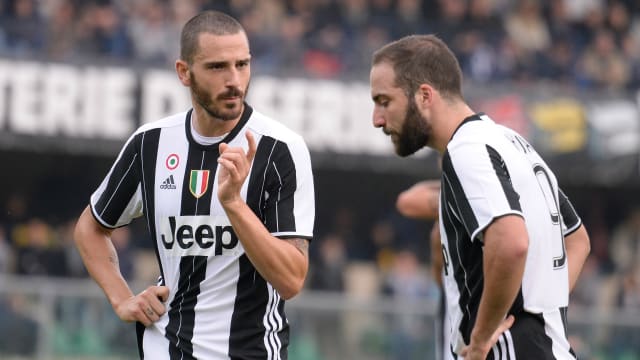 Leonardo Bonucci is rejoining Juventus from AC Milan and will trade places with Gonzalo Higuain and Mattia Caldara, Massimiliano Allegri has confirmed.

The Bianconeri boss revealed Italy defender Bonucci, who flew into Turin to complete a medical on Thursday, is bound to link up with the club he left in a shock EUR42million switch just over a year ago.

Paris Saint-Germain were rumoured to be interested in the 31-year-old, but the former Juve skipper has engineered a swift return to the club where he spent seven successful seasons.

His arrival at Allianz Stadium comes as Higuain finalises an expected loan move to Milan with a view to signing permanently at the end of the season.

The Argentina striker will be joined at the Rossoneri by team-mate Caldara, the 24-year-old centre-back squeezed out by Bonucci's return.

"Leonardo is back after one year. He is an important player," Allegri told Sky Sport Italy.

"In six months he has not changed at all.

"Caldara is younger and along with [Alessio] Romagnoli and [Daniele] Rugani is part of the best defending trio in Italy. I am sorry but the circumstances forced us to let him go.

"As for Higuain, I thank him for these two seasons during which he gave his best. Milan have signed a great striker, for sure."

Higuain scored 40 Serie A goals for Juve after joining from Napoli in 2016.

Caldara, who officially signed from Atalanta in January 2017, failed to make a competitive appearance having remained on loan at his boyhood club last term.