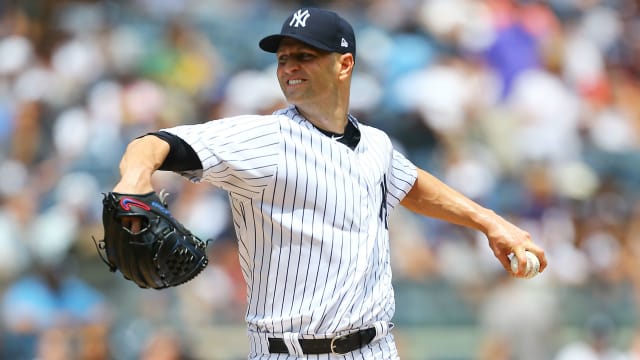 All-Star J.A. Happ impressed on his debut for the New York Yankees, who defeated the Kansas City Royals 6-3.

Just 24 hours after Happ penned an emotional farewell to the Toronto Blue Jays, the 35-year-old pitcher donned the New York pinstripes and did not disappoint in MLB action on Sunday.

Happ spent six innings toeing the rubber and allowed only three hits and a run in the Yankees' win over the Royals.

With the new look, Happ also earned a new emoji from New York's Didi Gregorius. The on-target right-hander aptly was given the target symbol.

"For him to go out there and give us a strong outing like he did, I'm sure he feels really good about that," Yankees manager Aaron Boone said. "It goes a long way to helping get him settled in because he's going to be important for us."

Happ was acquired by New York on Thursday in exchange for both Brandon Drury and Billy McKinney, and is still getting used to his new digs.

"It was kind of weird looking down and seeing the pinstripes on me," Happ said. "But I'm happy to get used to it."

Happ has pitched for the Philadelphia Phillies, Houston Astros, Pittsburgh Pirates and Seattle Mariners but felt some relief after finding a new home in New York.

"It was excitement and it was relief," he said earlier in the week. "I think there was some anxiety leading up to the deadline, of course. I thought that I might go somewhere, I just didn't know where. But what a great place. I'm looking forward to it. I like to compete and I think there is probably no better stage to do that."