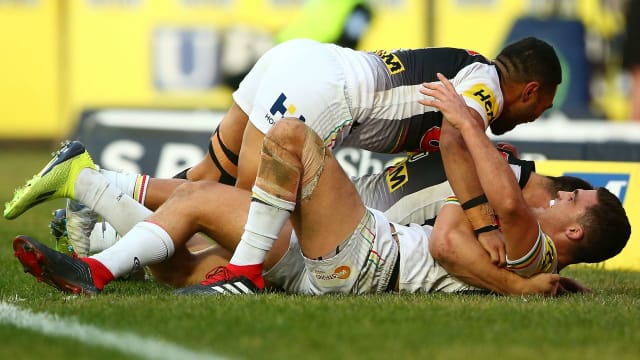 The Panthers were heading for a fifth defeat in six NRL matches at Lottoland, but the top-four contenders came storming back to snatch a victory that looked to be beyond them on Saturday.

Struggling Manly led 8-6 at the break, Manase Fainu crossing just before the interval after Dean Whare burst through to score the opening try in his 100th match for Penrith against his former club.

A quickfire Brian Kelly brace following a Daly Cherry-Evans try put the Sea Eagles in command, but the Panthers pulled off a remarkable victory despite being 18 points down with 12 minutes to play.

Josh Mansour dived over in the corner, Isaah Yeo capitalised on some suspect defending to cross and Waqa Blake dotted down following an incisive run from Viliame Kikau.

The Sea Eagles were reeling and Nathan Cleary went under the posts to leave the home side shell-shocked, the half-back converting to complete the scoring to finish with a 12-point haul.

The Rabbitohs found themselves 14 points down against the bottom side, but pulled off a 26-20 win at ANZ Stadium.

Anthony Siebold's side were in danger of suffering back-to-back defeats following their loss to Wests Tigers last time out after Clinton Gutherson and Jarryd Hayne went over in quick succession with Hymel Hunt in the bin.

Michael Jennings added a third Eels try as Parramatta went in at half-time with an 18-6 lead, but Campbell Graham scored a second-half double and Dane Gagai completed a brace after Robert Jennings had crossed the whitewash.

Melbourne moved back above the Bunnies ahead of their showdown next Friday with a 44-10 drubbing of Canberra Raiders, Curtis Scott scoring two of seven tries for the ruthless defending premiers.

The @storm are turning it on now!#TelstraPremiership#NRLStormRaiders#NRLpic.twitter.com/upEcOoxvxW