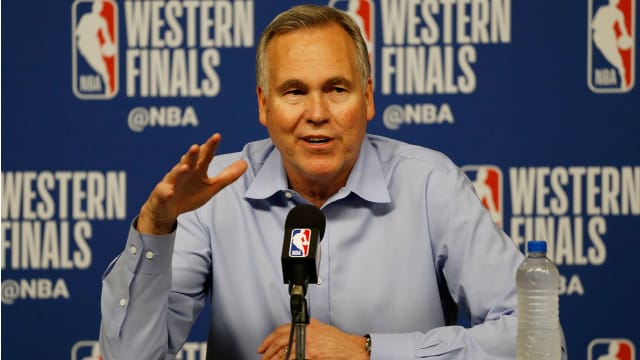 Mike D'Antoni is confident the Houston Rockets can take the next step in the NBA next season.

The Rockets finished last season with a 65-17 record and advanced to the Western Conference finals, where they fell to eventual champions the Golden State Warriors in seven games.

Houston have made significant changes to their roster this offseason and head coach D'Antoni has faith in his team.

"I'm confident and I love our guys," D'Antoni said on Saturday. "And I think the worst we're going to be is great and hopefully we can take that last step."

But, former Rockets forward Trevor Ariza agreed to a one-year, $15million contract with the Phoenix Suns when free agency began on July 1.

Forward Luc Mbah A Moute, who appeared in 61 games for Houston last season, then signed a one-year deal with the Los Angeles Clippers.

"You hate to lose Trevor and you hate to lose Luc," D'Antoni said. "It happens. That's the business part of it and we'll miss them. But at the same time, it gives opportunities to other guys...We're moving along. It's changed but we're trying to make it for the best."

Houston also added forward James Ennis and are the Rockets are reportedly prepared to sign Carmelo Anthony, who will receive a buyout from the Atlanta Hawks, to a veteran's minimum contract.

"If we're going to beat Golden State -- which everybody is searching for -- you've got to take some chances and you've got to hope that things hit out and hit that sweet spot," D'Antoni said.