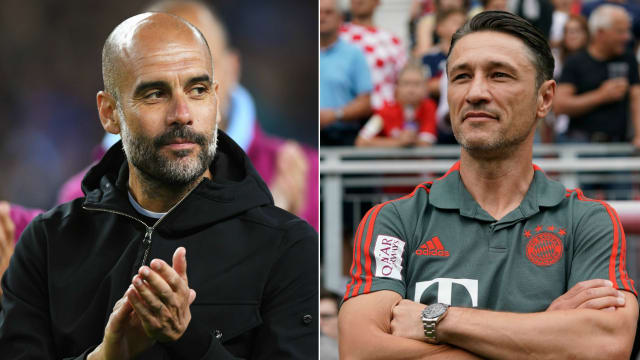 Niko Kovac admits he faces a long road to be considered as successful at Bayern Munich as one-time mentor and current Manchester City boss Pep Guardiola.

The pair are set to meet in an International Champions Cup clash in Florida in what will be Bayern's third pre-season outing under new coach Kovac.

It comes more than three years after the Croatian was invited to attend a Bayern training camp in Doha by then-coach Guardiola, who spent three successful seasons in charge of the German giants.

Kovac said the experience left him with a lasting appreciation of the three-time Bundesliga winner.

"For me personally Pep Guardiola is the best coach in the world. And it was a pleasure, an honour really, to sit in on his training sessions and the trip to Qatar," Kovac told reporters.

"At that time I was trying to learn what he was doing, if there were parallels to myself and how I could get better. That's the reason I wanted to be a part of that training camp.

"It was nice as he had a conversation with my brother and me, where we learned a lot. We had a great time. And I don't get arrogant [and think] that I will be more successful than him.

"First we have to try and be successful and after that I have to accomplish quite a lot to even be considered near Pep Guardiola."

Sven #Ulreich: " I'm looking forward to facing a coach that we were very successful with. There will always be a little bit of Pep at #FCBayern." #FCBMCFC#ICC2018pic.twitter.com/a62sjB3hzl

Beaten 2-0 by Juventus during the week, Bayern are likely to again be without Jerome Boateng for the City encounter as the defender battles a stomach problem.

The in-demand Germany international is reportedly in talks with Paris Saint-Germain over a move to Ligue 1.