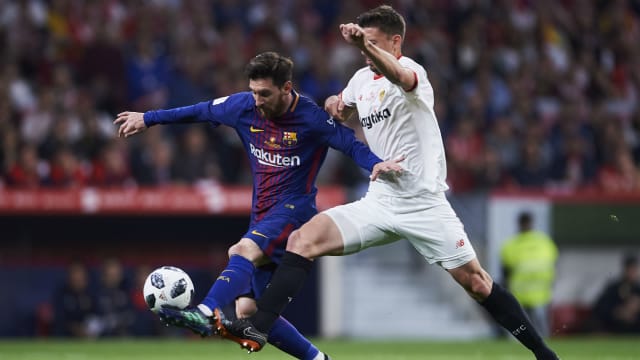 Clement Lenglet is adamant his signing for Barcelona was not premature and is confident of making the step up after joining from Sevilla.

Lenglet joined Sevilla in January 2017 from Nancy and instantly forced his way into their starting XI, becoming a regularly figure for Jorge Sampaoli before the end of the campaign.

The young Frenchman continued to be relied upon at centre-back last term under Eduardo Berizzo, Vincenzo Montella and Joaquin Caparros, making 35 LaLiga appearances in total.

Although Lenglet arguably had his best match of the season in the 2-1 win over Manchester United at Old Trafford in the Champions League, his performances lacked consistency, as he appeared in humbling defeats to Real Madrid, Real Betis, Eibar, Atletico Madrid and Spartak Moscow.

Nevertheless, Barca opted to trigger Lenglet's reported EUR35million release clause earlier in July and, despite some supporters having reservations, he is confident about his chances.

"I am very happy to be here," Lenglet told reporters. "I was ready to sign for Barcelona and every day I feel better.

"I try to talk to the people of the club and my team-mates to adapt as soon as possible to a game that is different for me. I'm growing."

For the moment, Barca have several options at centre-back, with Lenglet added to Gerard Pique, Samuel Umtiti, Thomas Vermaelen and the likely departing Yerry Mina.

Barca's first competitive game of the season will come against Lenglet's former side Sevilla in the Supercopa de Espana, and the defender is confident of lining up.

"There's more chance to play because there are three or four players missing from my position," Lenglet said. "But I have to show in pre-season that I'm worth playing, regardless of there being more or less competition."