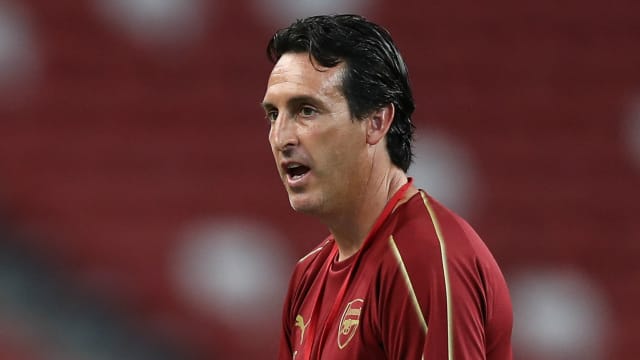 Unai Emery is ready to reunite with old friends as he takes his Arsenal side into an International Champions Cup tie against former club Paris Saint-Germain.

Emery departed PSG at the end of the 2017-18 campaign despite a clean sweep of domestic trophies and was subsquently appointed Arsene Wenger's successor at Arsenal.

The Spaniard tasted ICC defeat on penalties against Atletico Madrid in the Gunners' opening match in the competition but has a chance to record victory against PSG in Singapore on Saturday.

"I am very grateful to PSG," Emery told reporters. "It was a good experience, a good moment in my career. Now we are going to play against a big, big club with big players.

"They won't have every player on the pitch because they are on holiday, but for me it's important for our preparation. It will also be nice for me to meet my friends who I worked with at Paris Saint-Germain.

"For us, it's about continuing our preparations. It's another match but we don't want to change our focus. Our focus is to get every player up to speed and work on tactical things to get better for when we start [Premier League] competition.

"They are two big clubs with a big history and big present. For me, this is different to other ties but for my work it's the same. It's demanding but very exciting to work this way."

Thomas Tuchel is the new man in the PSG dugout but Emery is not expecting to have a detailed conversation with the German, who previously coached Borussia Dortmund.

"Every coach has the chance to meet in Nyon every year when we have the coaches meeting and we can also speak tomorrow if we are together," Emery said.

"Usually you don't speak specifically about football in this moment, more football in general."