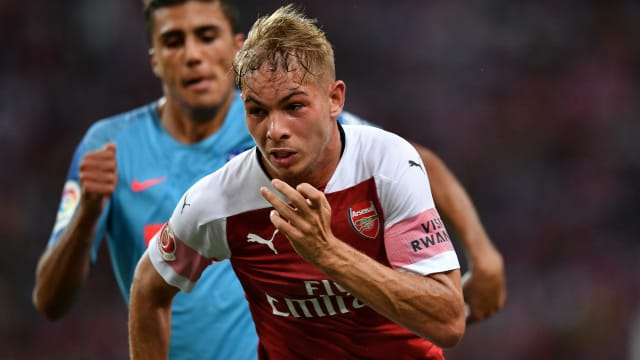 Smith Rowe started the match in the Singapore National Stadium and linked up well with Alexandre Lacazette in the first half, playing just behind the Frenchman and alongside Pierre-Emerick Aubameyang and Reiss Nelson.

Two minutes into the second half, Smith Rowe darted past two defenders on his way to unleashing a venomous shot into the top corner of the net that levelled the match at 1-1, and though Arsenal eventually lost 3-1 on penalties, Emery expressed his satisfaction with what he saw from his young players.

"It's a moment for the young players to show their quality, like Smith," Emery told reporters.

"Arsenal needs to give them the opportunity to work with us and show their quality in each match. Today I think every player plays well in this big game, and this goal [by Smith Rowe] is very good for him and for the team.

"He has grown up in the academy. We need to give the young players the opportunity to play matches like today.

"I'm very happy with his work on the pitch, not only today but every day. He started because his performance is good in each training session."

Emery handed the captain's armband to Aaron Ramsey against Atletico and said the Wales midfielder possessed the right qualities to lead his team in 2018-19.

Ramsey is currently involved in negotiations to extend his Arsenal contract, which is due to expire in 2019, and the new manager said he wanted to keep the 27-year-old in North London.

"Aaron is an important player for us," said Emery.

"For me I want him to stay with us, to work with us, to give the team big performances. I think he is going to stay here with us."

On the question of Ramsey becoming captain permanently, Emery said: "It's not yet official, the decision.

"I want five captains in the team. Aaron has the qualities to be the captain."