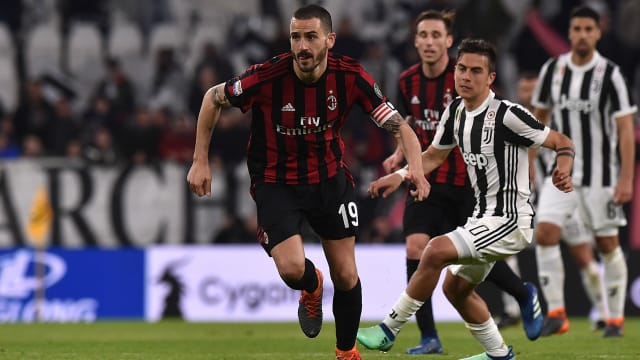 Italy international Bonucci has been linked with both his former club and Ligue 1 champions Paris Saint-Germain following an underwhelming first season with the Rossoneri.

Juve have now emerged as his favoured destination, the 31-year-old having initiated discussions over a potential move back to Turin.

Leonardo revealed Milan were willing to do a deal and that the Bianconeri were not the only club he had spoken to about the defender.

"The [negotiations with Juve] started with the desire of Bonucci. If we can do it we will do it," he said.

"Everything started with his idea, a very calm and sensible idea. From there we will talk and see if it is possible.

"He is a player who arrived last year as a symbol of change. He was made captain right away, which is rare. It is not yet decided that he will go."

5 - Leonardo #Bonucci is the only defender to have scored at least 2 goals in each of the last 5 Serie A campaigns. Dangerous.

Bonucci's possible return to the Serie A champions prompted talk Gonzalo Higuain could head in the other direction.

Chelsea striker Alvaro Morata is also believed to be in the sights of Milan, although Leonardo insisted Financial Fair Play concerns complicated the chances of any large outlay.

"Every situation has a different formula," he said. "We are bound to FFP and I do not think it will be possible to make a big investment.

"This is the situation at the moment."