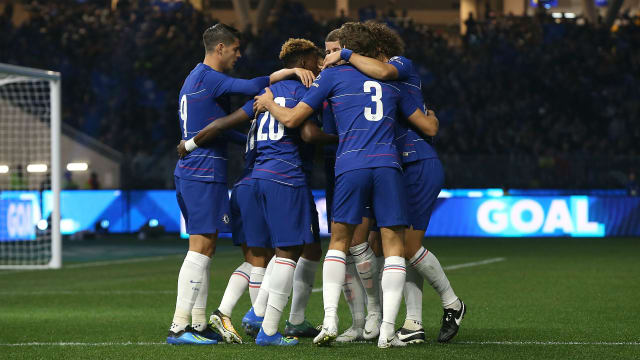 Maurizio Sarri's first match in charge of Chelsea ended in a 1-0 win over Perth Glory in a pre-season friendly on Monday, as new signing Jorginho made his debut.

It has been a turbulent few months at Stamford Bridge with the departure of Antonio Conte amid other off-field issues, but in their first game under Sarri's stewardship they looked controlled and composed.

Chelsea were much quicker out of the blocks than their hosts and had the lead after just five minutes - 17-year-old Callum Hudson-Odoi doing well on the left flank and crossing into the centre for Pedro to guide home.

The Blues continued to dominate the first half, with Jorginho looking assured and dictating the play from the centre on his first appearance since following Sarri from Napoli.

Callum Hudson-Odoi in that first half...  #CFCinPerthpic.twitter.com/iueDjMw9Kn

They did not threaten again until early in the second half, however, when Alvaro Morata headed a cross down to Mario Pasalic, who forced it on to Ross Barkley and the England international struck the post.

Glory improved in the second half as Chelsea struggled for cohesion following a raft of substitutions, though the lead was rarely threatened.

Lucas Piazon nearly added a second late on when Tammy Abraham brilliantly teed him up on the edge of the area - the Brazilian hitting a tame effort straight at the goalkeeper.