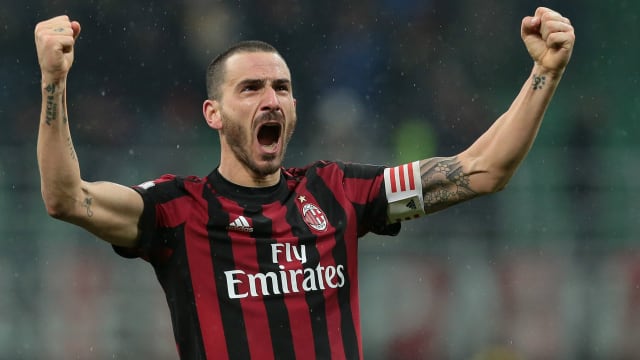 AC Milan head coach Gennaro Gattuso is trying to persuade Leonardo Bonucci to stay, as he heaped praise on the captain amid interest from Paris Saint-Germain and Juventus.

Bonucci moved to the San Siro last season but the veteran defender's future in Milan is uncertain, with PSG and Juve reportedly circling.

French champions PSG have been linked to Bonucci, while former club and Serie A holders Juve have emerged as a possible suitor - reports claiming Gonzalo Higuain could be used in a swap deal to re-sign the 31-year-old centre-back.

Asked about Bonucci ahead of Wednesday's International Champions Cup clash against Manchester United in Los Angeles, Gattuso told reporters: "Future? I do not know.

"I talked to him. Leo had a confrontation with me, but I'm not the club. He must talk to the managers, but as long as he wears the Milan shirt, I want to see the Bonucci of these first 12 days.

"A great professional, always the first to lead the group. I hope he can stay, he is a valuable player with a great mentality. When a player expresses a desire, the coach and those working in a group must do everything possible to persuade him to stay.

"Agonistically, we must think about the pros and cons. If the player asks explicitly, we need to tackle the subject."

Milan have bolstered their squad with the signings of Ivan Strinic, Pepe Reina and Alen Halilovic in the off-season.

There could be further business before the transfer window shuts as Gattuso said: "I think the club knows the roles that are missing to strengthen the team. They know it, I have reiterated it, but I think the most important thing is to take players who can help the team and improve it.

"The club will make choices, economically they're is very strong. We know the things that must be done."