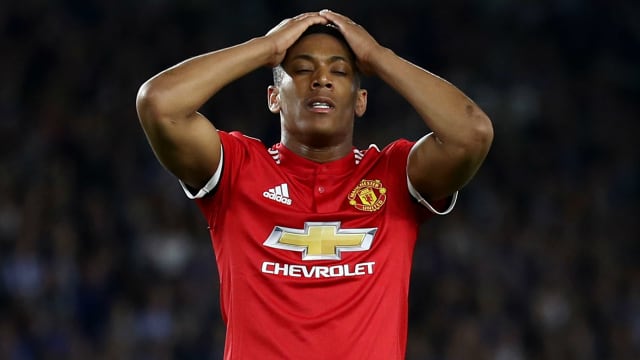 Manchester United manager Jose Mourinho warned Anthony Martial that "you cannot do whatever you want in life" as the disgruntled Frenchman eyes a departure from Old Trafford.

Martial has been linked with a move away after his agent last month revealed the 22-year-old was ready to leave in search of more opportunities.

The France forward grew frustrated towards the end of the 2017-18 campaign after finding his chances limited following the arrival of Alexis Sanchez in January.

Martial started the 1-1 draw with America and the former Monaco youngster was in the line-up again on Sunday as United played out a scoreless stalemate against San Jose Earthquakes in Santa Clara, California.

Asked about Martial - who struggled at Levi's Stadium - and the comments made by his agent, Mourinho told reporters: "I would like to be in Los Angeles now and I am in San Jose.

"I would like to play against Leicester on Sunday but I have to play on Friday, so you don't get always in life what you want."

Another #MUTOUR game ticked off.

Mourinho was speaking after the Red Devils played out their second successive draw in the United States.

Undermanned following the World Cup, United were disjointed and void of creativity as they fired a blank against the MLS strugglers.

Sanchez made his return after visa issues delayed his entry into the country and he was able to inspire United, who hit the crossbar via Eric Bailly in the first half but struggled afterwards.

"For me is a very strange pre-season," Mourinho said. "Pre-season, you try to be motivated and motivate the people around you but is not easy. I did some pre-season with some players but to have 10 players away is very strange.

"So the motivation is to try to train the best we can, to give the players minutes, to give young players an opportunity to develop and that's it."

United captain Antonio Valencia hobbled off with an apparent calf issue after just seven minutes - a concern ahead of the club's Premier League opener against Leicester City on August 10.

Mourinho told MUTV: "He is injured. And I think we need to get used to it because last season he was already in this kind of situation and probably this season we will have more than that."