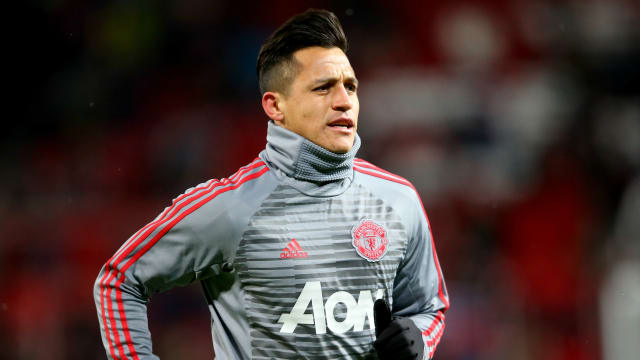 Jose Mourinho says Alexis Sanchez has to play against San Jose Earthquakes on Sunday as the Manchester United manager grapples with his limited attacking options in the build-up to the new Premier League season.

An undermanned United kicked off their pre-season tour with a 1-1 draw against Mexican giants America in the absence of star forwards Sanchez, Romelu Lukaku and Marcus Rashford on Thursday, with Juan Mata on the scoresheet.

Lukaku and Rashford are on holiday following the World Cup, while Sanchez is set to finally join his team-mates in the United States in the coming hours after being granted a visa to enter the country.

Despite his belated arrival, manager Mourinho plans to use the 29-year-old against the Earthquakes in California, with United beginning their domestic campaign at home to Leicester City in just three weeks' time.

"I don't even know if he is flying, if he is in Los Angeles or if he is in Manchester - I have no idea about it. There will be no Lukaku or Rashford, for sure, and we have to try with what we have," said Mourinho, who suggested Antonio Valencia will become the team's permanent captain this season.

"It's not about if he can play, it's about when he has to. When [Anthony] Martial left the pitch, it was Mata [leading the attack]. When Mata went to the sides, it was a kid that trained with us for the first time this pre-season [Mason Greenwood].

"There's no Lukaku or Rashford here and probably not even for the start of the Premier League, so it's about when Alexis lands and when he lands, he has to play because he trained with us for five days before we departed to Los Angeles and we left one fitness coach behind with him to keep training with him. Of course, it's individual training but when he arrives, he has to play."

Mata salvaged a draw with America in sweltering conditions in Phoenix, where the Red Devils looked to be facing defeat.

A bullet header from Henry Martin saw United fall behind just shy of the hour mark before Mata hammered home an equaliser with 12 minutes remaining.

The Spain playmaker had hit the post in the first half before eventually getting on the scoresheet, burying the rebound after Ander Herrera hit the woodwork from a cross from highly rated youngster Tahith Chong.

"It was a good training session for us and I think they start their league this week, so they were at a more advanced stage than us. I think both teams fought for a result," Mourinho added.

"It was a friendly, the result was not the most important thing, but I think the players fought for the result. I think in the first half we were the best team and had the best chances. In the second half, they were stronger than us and scored the goal, then without the only striker we have here [Anthony Martial] we had to try to go for it. The players showed their intentions."