Double boost for Bouchard in Gstaad 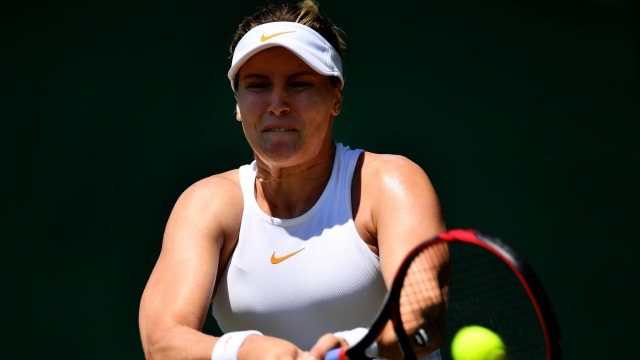 Eugenie Bouchard had two reasons to celebrate on Friday after making it through to the semi-finals at the Ladies Championship Gstaad.

The Canadian reached the last four of a WTA Tour event for the first time since January 2016 with a 7-5 6-0 victory over Veronika Kudermetova.

Bouchard won 10 of the last 11 games to progress in the tournament, then found out afterwards she has received a wild card for the Rogers Cup in Montreal next month.

"Eugenie is currently showing great things and we hope that she can keep her momentum going in Montreal," said tournament director Eugene Lapierre.

Having battled back from the brink of defeat against Timea Bacsinszky and Viktorija Golubic in Switzerland, Bouchard eased past her Russian opponent.

Next up will be top seed Alize Cornet, who knocked out Samantha Stosur 6-4 7-6 (7-2) to record her first win over the Australian since 2009.

The other semi-final will be between Mandy Minella and Marketa Vondrousova after they recorded straight-set victories over Sara Sorribes Tormo and Evgeniya Rodina respectively.

At the Bucharest Open, there was mixed news for Romanian duo Mihaela Buzarnescu and Sorana Cirstea.

While Buzarnescu progressed at the expense of Yafan Wang, compatriot Cirstea lost out to top seed Anastasija Sevastova despite winning the first set of their quarter-final meeting.

Petra Martic also needed three sets to prevail against Laura Siegemund, while there were mixed emotions for Ons Jabeur.

The world number 123 eased to a 6-2 6-2 result against Vera Zvonareva in her delayed second-round match, but was then beaten in straight sets by Polona Hercog in the quarter-finals later on Friday.