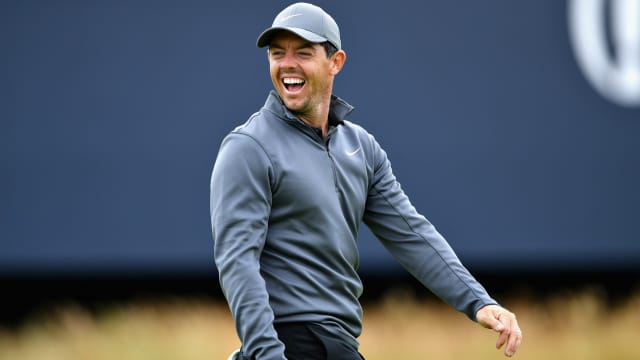 Rory McIlroy wants to channel the youthful, carefree attitude that saw him shine on his Open debut at Carnoustie when the course hosts the Championship this weekend.

It has been 11 years since McIlroy showed his blossoming talent to the world when he collected the silver medal as the top amateur, having been tied for third after round one.

The Northern Irishman returns in 2018 as a four-time major champion, but the last of those triumphs came at the US PGA Championship four years ago.

McIlroy, now 29, believes that age has bred a certain caution in his game and the 2014 Open champion hopes to play with a more instinctive style.

"I've alluded to the fact that I think sometimes I need to get back to that attitude where I play carefree and just happy to be here," he said.

"It was my first Open Championship. I was just trying to soak everything in and I was just so grateful to be here.

"And I think that's a big part of if you're happy in what you're doing and you're just happy to be here, I feel like a golf tournament is where I feel the most comfortable. It's where I feel like I can 100 per cent be myself and express myself.

"I think sometimes with the pressure that's maybe put on the top guys to perform at such a high level every week, that starts to weigh on you a little bit.

"I look back at those pictures and the more I can be like that kid the better."

McIlroy added that partnering Jon Rahm, 23, in practice this week helped to alter his mindset.

He added: "It was actually nice playing with Jon Rahm because the first instinct he has is get up on a tee box and pull a driver out of the bag.

"It's more of playing with the freedom and, I don't want to say naive, but there is something nice about being young and being oblivious to some stuff.

"The more I can get into that mindset, the better I'll play golf."