Angels clap back at Manfred's marketing comments on Trout 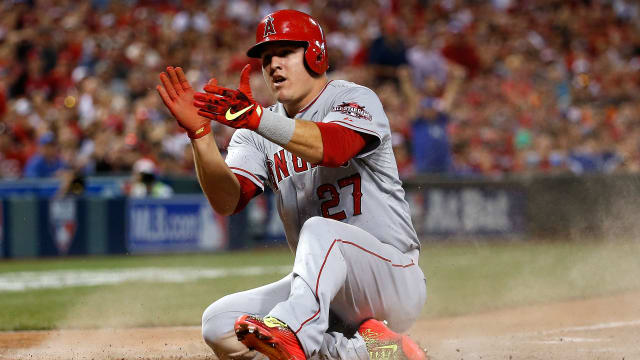 Commissioner Rob Manfred said MLB would love to do more to market Los Angeles Angels outfielder Mike Trout, but it is not quite that simple.

Manfred went on to say that Trout, who is a two-time American League MVP and a seven-time All-Star, has to be willing to market himself if the 26-year-old wants to become more popular in the sport.

"Player marketing requires one thing, for sure: the player," Manfred said at his annual All-Star Game press conference, via the Orange County Register.

"You cannot market a player passively. You can't market anything passively. You need people to engage with those to whom you are trying to market in order to have effective marketing."

Trout has been vocal, though, that he does not want to make himself any more of a celebrity than he already is and his focus always has been on winning a World Series rather than gaining personal attention.

He has twice turned down the opportunity to play in the World Baseball Classic, and he has never participated in the Home Run Derby at the All-Star Game.

"I'd rather just have that night with my family, spend time with them," Trout said last week. "I just want to relax and enjoy the day. Just watch it ... I just never had any interest in doing it."

Manfred went on to explain that the decision is up to Trout, but the Angels star would have to spend more of his downtime making an effort.

"That's up to him. If he wants to engage and be more active in that area, I think we could help him make his brand really, really big, but he has to make a decision that he's prepared to engage in that area. It takes time and effort."

It appears the Angels caught wind of Manfred's comments as they released a statement on Wednesday, sending praise to Trout and highlighting the marketing work he has done to help MLB.

Today, the #Angels released the following statement on OF Mike Trout: pic.twitter.com/xFLURtZ4bT

"Mike Trout is an exceptional ambassador for the game," the statement read, in part. "Combined with his talent, his solid character creates a perfect role model for young people everywhere.

"Each year, Mike devotes a tremendous amount of his time and effort contributing to our organisation, and marketing Major League Baseball. He continually chooses to participate in the community, visiting hospitals, schools and countless other charities."