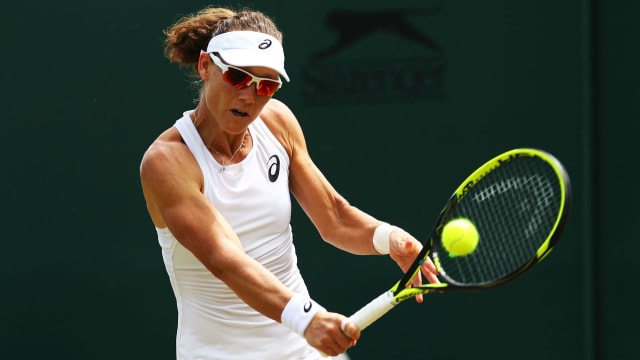 Samantha Stosur defeated Francesca Schiavone in a rematch of the 2010 French Open final at the Ladies Championship Gstaad on Tuesday.

Schiavone triumphed to lift the trophy at Roland Garros eight years ago but the Italian - now ranked 391 in the world - was unable to pull off a repeat result against the 2011 US Open champion.

Stosur, the fifth seed at the tournament in Switzerland, reeled off an impressive run of seven successive games on her way to a 6-3 6-2 victory in the battle between two former grand slam winners.

Elsewhere in the opening round, Eugenie Bouchard rallied from a set down to see off Timea Bacsinszky, back in action after overcoming a calf injury, 4-6 7-6 (7-1) 6-4.

At the Bucharest Open, home favourite Sorana Cirstea overcame Cagla Buyukakcay of Turkey 6-3 6-3, setting up a clash with Maryna Zanevska - who knocked out fellow Belgian Yslaine Bonaventure on Monday - for a place in the last eight.

Cirstea's compatriot Irina-Camelia Begu suffered an early exit, winning just three games as she was knocked out by Tunisian Ons Jabeur, but Mihaela Buzarnescu had no such problems against Danka Kovinic.

Vera Zvonareva swept aside Ekaterina Alexandrova 6-1 6-2 in all-Russian clash and top seed Anastasija Sevastova came through a tie-break in the deciding set to see off Dalila Jakupovic.