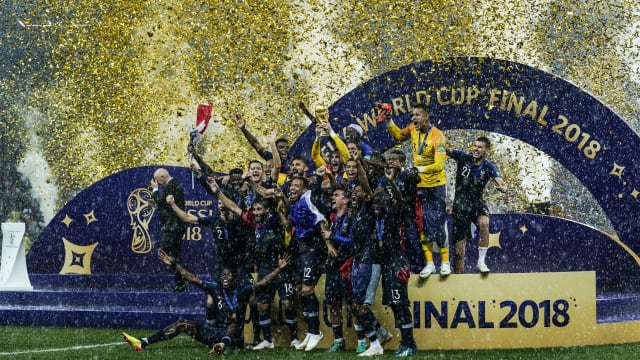 France are world champions for the second time after winning a scintillating final against Croatia that epitomised a tournament packed with drama, goals, glory and heartache.

Kylian Mbappe and Antoine Griezmann both took their World Cup goal tallies to four with strikes in the Moscow showpiece, while Paul Pogba scored his only goal of the 2018 competition and Mario Mandzukic put through his own net to make France the first team to score four in a final since Brazil in 1970.

Didier Deschamps' men won all but one of their seven matches en route to lifting the game's most coveted trophy for the first time in 20 years, scoring 14 goals and conceding six, while Croatia claimed the unwanted record of being the first team in 44 years to lose in their first World Cup final.

But it wasn't just the finalists who racked up the numbers across the course of an entertaining tournament that was statistically remarkable - and even better to watch.

4 - France became the first team to score four goals in a World Cup final since Brazil beat Italy 4-1 in 1970.

1 - Croatia are the first team to lose in their debut appearance in a World Cup final since Netherlands in 1974 (2-1 against Germany).

21 - Russia's victory against Saudi Arabia on matchday one means the host nation has never lost their opening match in any of the 21 editions of the World Cup (16 wins, 6 draws, no losses).

1 - England won a penalty shoot-out at the World Cup for the first time following their match against Colombia in the last 16.

1 - England have won a penalty shoot-out at the World Cup for the first time. Ecstasy.#COLENG#ENG#WorldCup#ThreeLionspic.twitter.com/QNqLl6kMuD

3 - Germany became the third successive defending champions to be eliminated in the group stages of the competition after Spain four years ago and Italy in 2010.

33 - Cristiano Ronaldo is the oldest hat-trick scorer in World Cup history, with the Portuguese star aged 33 years and 130 days when netted his treble against Spain - the previous record holder was Rob Rensenbrink in 1978 for Netherlands against Iran (30 years, 335 days).

0 - Neither Ronaldo (six games) nor Lionel Messi (eight games) have scored a goal in a World Cup knockout match, with both failing to end their drought in Russia.

3 - Didier Deschamps is the third person to win the World Cup as both a player and a manager, after Brazil's Mario Zagallo and Franz Beckenbauer with Germany.

3 - Didier Deschamps has become the third person to win the World Cup as a player and as manager after Mario Zagallo and Franz Beckenbauer. Champion.#WorldCupFinal#WorldCup#FRA#CROpic.twitter.com/H3zrhkx9rO