Wimbledon diary: Avengers too late for an Infinity War as Djokovic triumphs 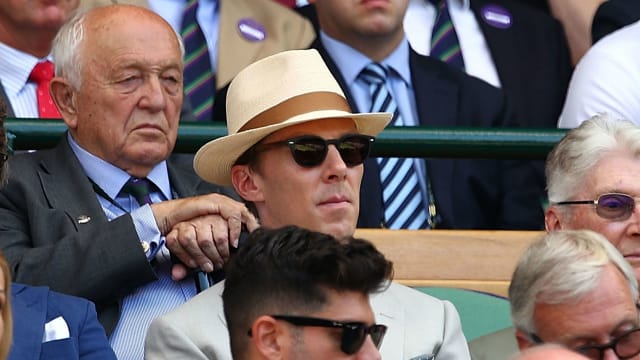 Novak Djokovic won the Wimbledon men's singles on Sunday, but a collection of individuals in the crowd may have provided cause for concern.

There was only one thing on Djokovic's mind before the start of play as he made sure to prepare himself perfectly for the challenge Kevin Anderson would pose.

For Anderson, though, there was still something to be proud of, despite his grand slam final record now standing at 0-2.

Meanwhile, Serena Williams' achievement in making the women's final on Sautrday was lauded by a very proud husband.

Three of The Avengers assembled on Centre Court for the final.

Benedict Cumberbatch (Dr Strange), Tom Hiddlestone (Loki) and Tom Holland (Spider-Man) were among the stars in the stands for Djokovic's reacquaintance with the Wimbledon trophy.

However, if it was an Infinity War they were after, they were two days late - John Isner and Anderson played the starring roles in that on Friday!

PHILIPPOUSSIS HAS HIS USES FOR NOVAK

How do you prepare for facing a big-serving, 6ft 8in opponent in the Wimbledon final?

By inviting a big-serving, 6ft 5in friend out to a practice court, of course!

Djokovic warmed up with Philippoussis in the hours leading up to his showdown with Anderson, although it didn't prove entirely necessary as the South African struggled on serve until late in the third set.

By that point it was too late.

Straight down to work for Djokovic. pic.twitter.com/2PqWlpcP5e

By reaching the Wimbledon final, Anderson ensured he will reach a career-high ranking of fifth when the updated list is released on Monday.

It turns out it's an ambition he and his team outlined in an unusual way some years ago.

"It was about two and a half years ago, just in the team ... we had a chat on WhatsApp called 'top-five Kev'. That was the goal," he said.

"I got to top 10 that year. Things were looking good. Then obviously I had a major setback and injuries in 2016. So seeing that I [now] made top five, I'm incredibly proud of that achievement."

Williams may have missed out on a record-equalling 24th grand slam by losing the women's singles final to Angelique Kerber just 10 months after the complicated delivery of her first child, but her husband Alexis Ohanian Sr lauded her efforts in returning to the court.

Ohanian wrote in a heartfelt message on Instagram:  "Days after our baby girl was born, I kissed my wife goodbye before surgery and neither of us knew if she would be coming back.

"We just wanted her to survive--10 months later, she's in the #Wimbledon final.

"@serenawilliams will be holding a trophy again soon--she's got the greatest one waiting at home for her. Our family knows she'll win many more trophies, too.

"She's just getting started. And I couldn't be more proud."

In the absence of a battle to rival the two men's semi-finals, two members of the media took up the mantle on Sunday.

A scuffle in one of the All England Club's press areas left one journalist holding his face. After leaving to check it in the bathroom mirror, he returned and shouted at his largely unbothered colleague, who had instigated proceedings.

No one was seriously hurt, but some professionalism was certainly damaged!