Moylan makes the difference on return to Penrith 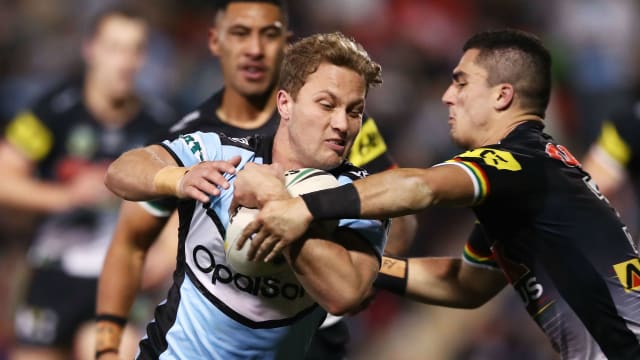 Ex-Penrith Panthers captain Matt Moylan scored his first try for Cronulla Sharks to inspire a 24-12 defeat of his former side.

Moylan departed the Panthers ahead of the 2018 season and returned to a hostile reception in Penrith, but his influence made the difference in an impressive away win.

Tries from Sione Katoa and Valentine Holmes - fresh from a match-winning State of Origin III turn - had Cronulla comfortably in front at the break, although Andrew Fifita became involved in a half-time altercation with Jack Hetherington.

Waqa Blake then crossed to reduce the deficit, but Moylan came to the fore and battled through to score before a delighted celebration.

Although Corey Harawira-Naera's response brought the Panthers back into contention again, Moylan teed up Holmes for his second of the night to secure victory.

"It was a bit different coming back here playing for the opposition and being in opposition sheds," said Moylan. "It's definitely something new to me but I was excited about it."

Elsewhere, the fit-again Mitchell Pearce helped Newcastle Knights to win at home for the first time since the start of April.

A miserable run of six straight defeats at McDonald Jones Stadium was ended in a narrow 18-16 triumph against basement side Parramatta Eels.

Ken Sio's penalty kick 21 minutes from time proved the difference, as Newcastle saw out the remainder of the second half and climbed one place to 11th.