England must improve against spin - Morgan 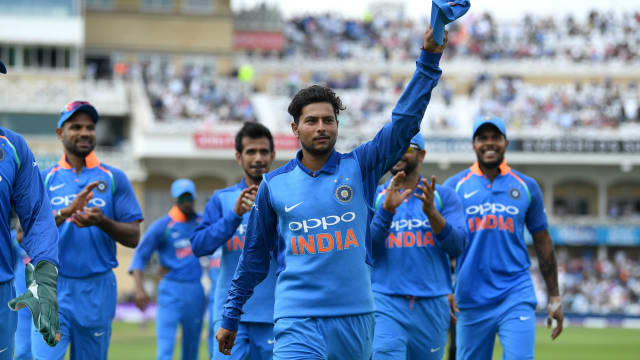 Sent in to bat, England were bowled out for 268 with Jos Buttler top-scoring with 53, but the star of the show was Indian wrist-spinner Kuldeep Yadav, who claimed career best figures of 6-25.

India made light work of the chase as Rohit Sharma (137 not out) and Virat Kohli (75) eased the visitors past England's total with almost 10 overs to spare.

The hosts were rattled early on as Kuldeep took apart England's top-order and Morgan said they needed more runs and a plan to combat the spinner next time around.

"The shift from ground-to-ground will be important, but that doesn't paper over the fact we need to get better at playing him," he said.

"When he does bowl well, he is very good and he exposes an area of our game we need to improve on, that is a healthy thing.

"It's a chance to improve in this area, however long it takes, between now and the World Cup.

"He did bowl well, we need to clarify and commit to our plans and just be better."

"You can be exposed more when you don't put a score on the board at a small ground. That exposed another area of our game, simply not scoring enough runs."

Meanwhile, Kuldeep was delighted as picked up his first five-wicket haul in ODI's, and is now targeting a place in the test squad later this season.

"Luckily I got three wickets in two overs which changed the momentum. I'm enjoying English conditions at the moment," he said.

"I didn't try anything new. I stuck to the basics and stuck wicket-to-wicket. I'm hoping for the Test call and let's see what happens in a couple of days when they announce the team.

"All six wickets are the best ones, the first was very important; we needed a breakthrough and got it."

The series continues Saturday at Lord's.