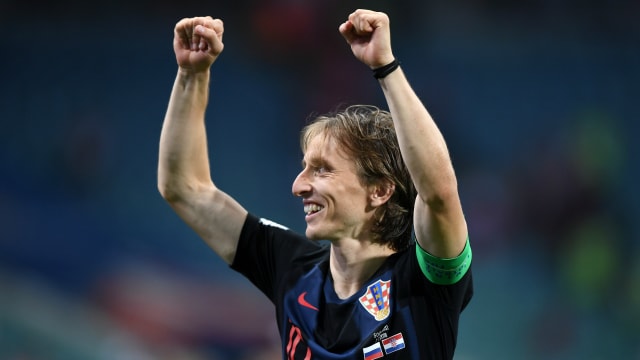 Luka Modric's supreme season for club and country means he should win the Ballon d'Or, according to Croatia legend Davor Suker.

It has been a memorable campaign thus far for Modric, who was influential in helping Real Madrid to a third consecutive Champions League crown.

That form for club has been carried on for his country at the World Cup in Russia, where Modric has been one of the players of the tournament and guided his side to a first semi-final since 1998.

Ahead of that contest against England in Moscow, Croatian Football Federation president Suker - a star of the team that reached the last four in France 20 years ago - says Modric deserves to be recognised for his achievements by breaking the 10-year monopoly Cristiano Ronaldo and Lionel Messi have had on football's greatest individual prize.

Speaking to ESPN, Suker said: "My captain does a great job in the dressing room - he's a role model on and off the pitch for all kids, not only in Croatia. If I had a vote [in the Ballon d'Or], I would vote for Luka."

Asked what similarities Modric and the current crop have in common with the side he played in, Suker replied: "Quality. First and foremost, quality. And physical preparation. If the player is not in good physical shape, he will not play well in a World Cup."

Ready to support #CRO in the #WorldCup semifinals? #BeProud#CROENG#Vatrenipic.twitter.com/QYEvpip4Wq

It promises to be a tight encounter against the Three Lions, but Suker insists Croatia are continuing to build for a bright future regardless of how they fare.

"I'm okay in the stands because I know there is a very thin line between winning and losing," he added.

"We could have been eliminated against Denmark [in the last 16]. I could be with my parents, eating and drinking and watching the game on TV. That's football

"Only football can make all Croatians go out to the streets. Football is sacred. We built the foundation for our house in 98, and now we're building the second floor."