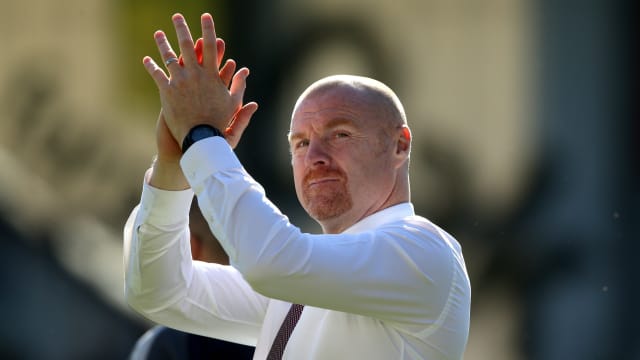 Sean Dyche insisted he was not downplaying Burnley's Europa League adventure when he stated that the Premier League remains the club's "bread and butter".

The Clarets are preparing to travel to Scotland for the first leg of their second qualifying round match against Aberdeen on July 26, and Dyche spoke about the challenge of readying his squad for the club's first European fixture in more than 50 years while ensuring domestic football took priority.

Burnley finished seventh last term and they kick of the new league season with a trip to Southampton on August 12, by which time they may be part-way through the third round of Europa League qualifiers.

"It's a strange thing about the psyche because it's a tremendous thing for Burnley football club to be in Europe," Dyche told Clarets Player HD.

"It's not there to be taken lightly and we won't be doing that, but it has to be balanced against the Premier League because that's the bread and butter of what we're about.

"You can go back into that debate of downplaying cups, but it's nothing to do with that. The fact is the Premier League is our bread and butter, but alongside that, the first time in Europe in 51 years means we are looking forward to that as well."

Burnley have yet to make any new signings ahead of the 2018-19 campaign but Dyche said that efforts to grow his squad are ongoing.

Scott Arfield and Dean Marney departed the club at the end of last season but Dyche says any transfers into Turf Moor need to be carefully negotiated in order to fit the club's financial constraints.

"We know the challenges of both, so therefore the importance of pre-season, and working in the market to add to the group and make it stronger, all combine.

"There's a lot going on and we have to make sure we can add to the grip to add to this upward curve.

"It's a broken record from me, but we are not the likes of Manchester City or Chelsea, where they can just go and get this or that player.

"Our club still has to make sense as a business and that often makes things tricky and not as easy to get deals done, but I am used to that.

"Patience is needed, that's for sure, and that can be trying, but it's one of those things."