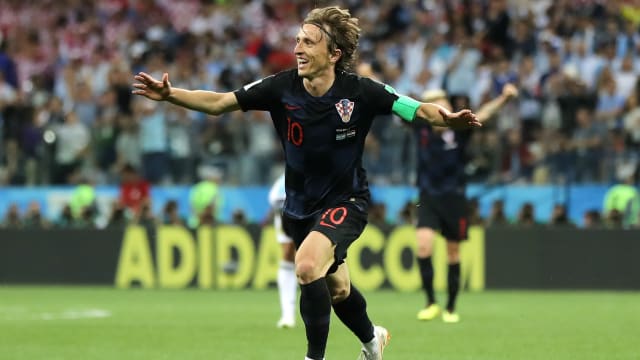 Croatia coach Zlatko Dalic praised Luka Modric ahead of his team's World Cup semi-final against England, saying the midfielder was in career-best form.

Modric, 32, has starred in Russia, and has been named man of the match in three of Croatia's five wins.

The Real Madrid midfielder, touted as a Golden Ball contender, is likely playing at his last World Cup, and Dalic is delighted to see Modric at his best.

"It's his quality that he's been showing for many years. When you see him sprinting after 115 minutes to retrieve a ball, it shows his desire, which is present in other team-mates, to do something," Dalic told a news conference on Tuesday.

"Luka has achieved everything possible at club level but hasn't done so for the national team. Since this is his last World Cup, given his age, I'm very glad he's among the last four at the World Cup, but all the other players are putting in that effort.

"We achieved success as a compact team who do not give in, who work for one another and this is maybe one of the best periods for Luka.

"He is playing the best football of his life."

Croatia have multiple injury concerns heading into Wednesday's clash in Moscow, with right-back Sime Vrsaljko the main worry due to a knee injury, while goalkeeper Danijel Subasic was also hurt against Russia in the quarter-finals.

Dalic confirmed Vrsaljko was in some doubt, while he insisted fatigue would be no excuse after his side were pushed to penalties in back-to-back matches.

"Vrsaljko has this niggle. We want players at 100 per cent fit. We will see after this practice session," he said.

"We need all the players but they must all be fit on the pitch. We've played five difficult games and they've taken their toll. We're tired but there can be no excuses: we've got to the semi-final, we're here to enjoy ourselves and give our all, we do not want to say we're fatigued or exhausted. We are not.

"There is still a chance to exhaust ourselves."